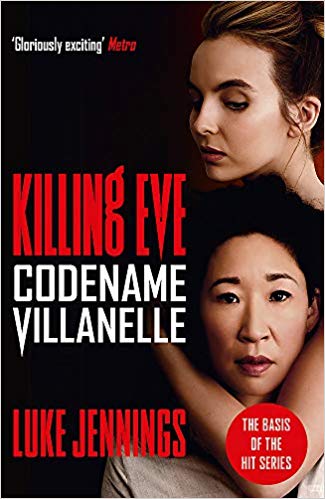 Synopsis from the publishers:

She is the perfect assassin. A Russian orphan, saved from the death penalty for the brutal revenge she took on her gangster father’s killers. Ruthlessly trained. Given a new life. New names, new faces – whichever fits. Her paymasters call themselves The Twelve. But she knows nothing of them. Konstantin is the man who saved her and the one she answers to. She is Villanelle. Without conscience. Without guilt. Without weakness.

Eve Polastri is the woman who hunts her. MI5, until one error of judgment costs her everything. Then stopping a ruthless assassin becomes more than her job. It becomes personal.

I loved the brilliant TV series Killing Eve and when I saw that Codename Villanelle by Luke Jennings was the basis for the series I was really keen on reading it. However, this is one of those rare occasions when I preferred the adaptation to the book. That’s not to say I didn’t enjoy the book, because I did – just not as much as the TV version. Now, that may be because I watched the TV series first – but I don’t think so. They begin at different points in the story. Codename Villanelle begins by introducing Villanelle, giving her background, real name and the details of her training as an assassin with the codename Villanelle, and her paymasters, known as The Twelve. Thus the suspense in that is built up in the TV series by not knowing anything about her other than her codename, just isn’t there in the book.

Both are fast paced, although the action sequences come over much better on TV, as you would expect.  Both portray Villanelle as a young woman who is psychologically invulnerable – a ruthless and successful killer, experiencing neither pain nor horror and totally unaffected by the pain she inflicts on others or the murders she carries out. But the dynamic between Villanelle and Eve Polastri that plays a large role in the TV series is missing in the book and there are several other changes too.

The book ends before the ending shown in the TV series and I’m assuming the next book Killing Eve: No Tomorrow, will continue the story, which I’m planning to read in the near future. There is a third book on the way too – Killing Eve: Endgame.

Luke Jennings is a London-based author and journalist who has written for The Observer, Vanity Fair, The New Yorker and Time. He is the author of Blood Knots, short-listed for the Samuel Johnson and William Hill prizes, and the Booker Prize-nominated Atlantic.

My thanks to the publishers, John Murray, for my review copy via NetGalley.