This week I’m featuring one of my current library loans, The House on Cold Hill by Peter James. I borrowed this book because I like Peter James’s books. This is a standalone novel, not one of his Detective Superintendent Roy Grace series. 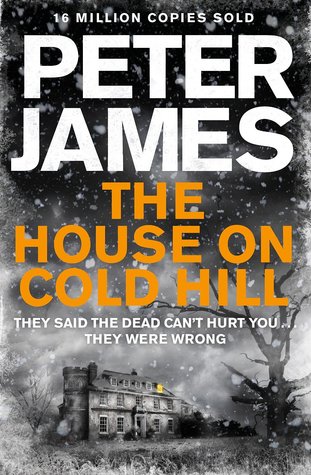 ‘Are we nearly there yet?’

Johnny, a smouldering cigar in his mouth, looked in the rear-view mirror. He loved his kids, but Felix, who had just turned eight, could be an irritating little sod sometimes. ‘That’s the third time you’ve asked in ten minutes,’ he said, loudly, above the sound of the Kinks’ ‘Sunny Afternoon’ blaring from the radio.

‘It’s your birthday soon,’ Caro said, during a commerical break in the TV programme. ‘You’re going to be an old man!’

‘Yep, tell me about it,’ Ollie replied.

Moving from the heart of the city of Brighton and Hove to the Sussex countryside is a big undertaking for born townies, Ollie Harcourt, his wife, Caro, and their twelve-year-old daughter, Jade. But when they view Cold Hill House – a huge, dilapidated, Georgian mansion – they are filled with excitement. Despite the financial strain of the move, Ollie has dreamed of living in the country since he was a child, and with its acres of land, he sees Cold Hill House as a paradise for his animal-loving daughter, a base for his web-design business and a terrific long-term investment. Caro is less certain, and Jade is grumpy about being removed from all her friends.

But within days of moving in, it soon becomes apparent that the Harcourt family aren’t the only residents in the house. At first it is only a friend of Jade, talking to her on Facetime, who sees a spectral woman standing behind her. Then there are more sightings of her, as well as increasingly disturbing occurrences in the house. Two weeks after moving in, Caro, out in the garden, is startled to see faces staring out of an upstairs window of the house.

The window of a room which holds the secret to the house’s dark history . . . a room which does not appear to exist . . .

13 thoughts on “My Friday Post: The House on Cold Hill by Peter James”