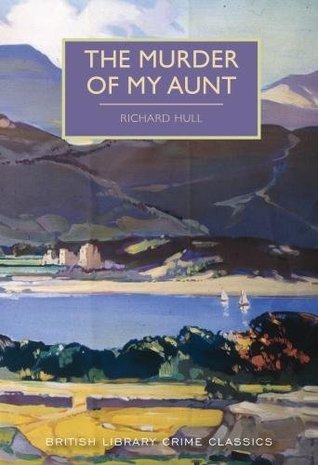 This edition, published in association with the British Library, has an introduction by Martin Edwards. It was first published in 1934 by Hamish Hamilton. It was Richard Hull’s first novel. His real name was Richard Henry Sampson (1896 – 1973) and up until 1934 he had worked as a chartered accountant. With the success of The Murder of My Aunt he devoted himself to writing.

The Murder of My Aunt is one of the best of the classic crime fiction novels from the Golden Age that I’ve read. On the face of it has a straightforward plot as Edward Powell, the narrator for most of the book, plots to murder his Aunt Mildred. They live in a house called Brynmawr on the outskirts of the Welsh town of Llwll. Mildred is his guardian, his parents having died in mysterious circumstances when Edward was very young. He detests living in Lwll and he also detests his aunt. It’s a contest of wills as Mildred finds Edward a great trial, she sees all his faults – he is selfish, self-centred, vain and lazy and foppishly effeminate – and she constantly nags him to change his ways, or she will ‘have to take action’. Edward, though decides that he will take action, thinking his life would be so much better without Mildred and he sets out to find a way to arrange her death so that no suspicion will fall on him. He makes copious notes of various methods and the steps he plans to take and that’s more difficult than he expected as his attempts keep failing.

But it’s the writing that lifts this book from the ordinary to an original and funny murder mystery and, whilst not laugh-out-loud funny, I thought it was brilliant. It’s witty and ironic from the start as Edward pontificates on the pronunciation of the word ‘Lwll’.  Neither Edward nor Mildred come across as caricatures, but as real people, both of them with their own faults. Edward is just so insufferably awful that I felt on Mildred’s side in their battle of wits, even though she shows him up in front of the whole village – and after all she had brought him up.

Once I started to read The Murder of My Aunt I was captivated and I had to read it quickly, anxious to find out if Edward did manage to kill his aunt. It makes very entertaining reading and I loved the ending, which took me by surprise and I thought was so clever – definitely a 5* read for me!

Now I’m looking forward to reading more of  Richard Hull’s books and have Excellent Intentions lined up to read soon.

This is qualifies for the Mount TBR Challenge and for the Calendar of Crime Challenge for March in the category of a book in which money/fortune/inheritance has a major role.

8 thoughts on “The Murder of My Aunt by Richard Hull”