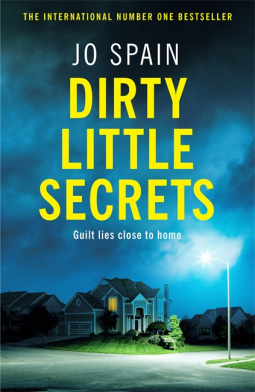 I first came across Jo Spain’s books last year when I read The Confession, a standalone novel and then The Darkest Place, her 4th Inspector Tom Reynolds Mystery book, both very good books. So I was keen to read her latest book, a psychological thriller, Dirty Little Secrets, another standalone book. I really enjoyed this very readable page-turner, keen to discover all the secrets.

It’s set in Withered Vale, a small, gated community of just seven houses, outside the small village of Marwood in Wicklow in Ireland. On the surface it is a perfect place where the wealthy live their  privileged lives and keep themselves to themselves – until a cloud of bluebottles stream out of the chimney of number 4 and Olive Collins’ dead and disintegrating body is discovered inside. She had been dead for three months and none of the neighbours had bothered to find out why she hadn’t been seen all that time. But someone must have known what had happened to her – the question being who?

When DI Frank Brazil, near to his retirement, and his partner young Emma Child arrive it’s not clear whether Olive’s death was accidental death or suicide. But they quickly establish that the boiler had been pumping out carbon monoxide and the vents and the letter box had been taped up.  It was then obvious that her death was either suicide or murder. There is plenty of DNA in the house, as it turns out that all the neighbours had visited Olive. She had tried to interfere in each of their lives and each one of them had something to hide, from past crimes, past relationships, addictions, and blackmail. They’re all suspects as each one had a motive for killing Olive.

I liked the way Jo Spain has structured her book – each character is introduced and gradually more and more facts about their lives and personalities are revealed. And Olive’s dead voice is interspersed among these people, revealing her personality, thoughts and relationships with the others, and showing just went on behind all the closed doors. I was fascinated and went from one person to the next wondering who was guilty, changing my mind as the book progressed. The characters are convincing and so it was easy to work out who was who and how they all interacted. The ending surprised me as although I had suspected what had taken place I hadn’t foreseen the whole picture.

I was hooked from the beginning to the end. Withered Vale went from being a place where the neighbours lived their lives in isolation to a much more united community as together they faced the enormity of what had happened.

My thanks to the publishers, Quercus, for my review copy via NetGalley.

Note: this book is one of my TBRs, so qualifying for Bev’s Mount TBR challenge and as it will be published in February it also qualifies for Bev’s Calendar of Crime challenge in the category of a February publication.