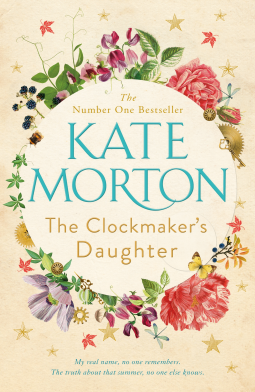 My real name, no one remembers.
The truth about that summer, no one else knows.

In the summer of 1862, a group of young artists led by the passionate and talented Edward Radcliffe descends upon Birchwood Manor in rural Berkshire. Their plan: to spend a secluded summer month in a haze of inspiration and creativity. But by the time their stay is over, one woman has been shot dead while another has disappeared; a priceless heirloom is missing; and Edward Radcliffe’s life is in ruins.

Over one hundred and fifty years later, Elodie Winslow, a young archivist in London, uncovers a leather satchel containing two seemingly unrelated items: a sepia photograph of an arresting-looking woman in Victorian clothing, and an artist’s sketchbook containing a drawing of a twin-gabled house on the bend of a river.

Why does Birchwood Manor feel so familiar to Elodie? And who is the beautiful woman in the photograph? Will she ever give up her secrets?

Told by multiple voices across time, The Clockmaker’s Daughter is a story of murder, mystery and thievery, of art, love and loss. And flowing through its pages like a river, is the voice of a woman who stands outside time, whose name has been forgotten by history, but who has watched it all unfold: Birdie Bell, the clockmaker’s daughter.

I was looking forward to reading The Clockmaker’s Daughter as Kate Morton’s The House at Riverton and The Secret Keeper are two of my favourite books, but I’m in two minds about it. Whilst I loved parts of it I struggled to read other parts, bogged down by the many changes of time, places and characters, even though I like complicated plots and dual time-lines. It could easily have been made into several books.

I found it difficult to separate the various strands and to create a coherent whole – and it is so long and drawn out. And then there is the supernatural element, which intrigued and delighted me. So, all in all, my reaction is confused and mixed, so much so that at times I wanted to give it 5 stars and then plummeted right down to 2 stars – hence the 3 stars!

It’s richly descriptive and I loved the descriptions of the locations, and of Birchwood Manor, the house on the bend of the river and the story of how Elodie searches to find the history and connections between the satchel, the photograph of a beautiful Victorian woman and an artist’s sketchbook certainly caught my imagination. I also loved the story of Birdie, the clockmaker’s daughter, who is the catalyst for the disaster that befell Edward’s life.

There are multiple narrators very gradually building up a history of Birchwood Manor and the people who lived there over the years up to 2016. But it’s hard to keep track of them all as the narrative jumps backwards and forwards so disjointedly. The connections between what seem to be separate stories eventually become clear – but you have to keep all the separate strands in your head and remember who is related and how their paths meet and diverge.

As the synopsis says it is a story of murder, mystery and thievery, of art, love and loss – all of which appeals to me. And I’m sure plenty of other readers will love this book. It’s a book that I really needed to concentrate on, which is not a bad thing, but for most of its 592 pages it moves at a snail’s pace and I found it an effort. But once you have got to the end and can see the whole picture it really is a good story; very cleverly plotted, maybe too cleverly for me.

Thank you to Mantle and NetGalley for my copy of this book for review.

12 thoughts on “The Clockmaker’s Daughter by Kate Morton”