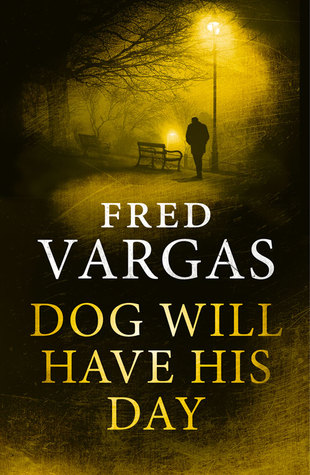 I enjoyed the first book in Fred Vargas’ Three Evangelists series so much – see my review – that I decided to read the next one Dog Will Have His Day  and I’ve reserved the third book, The Accordionist at the library. I love Fred Vargas’s books. She writes such quirky crime fiction, with eccentric characters and intricate plots that I love and find so difficult to solve.

The three ‘Evangelists’ are thirty-something historians, Mathias, Marc and Lucien, all specialists in three different periods of history, who live in a rambling house in Paris. Actually there are only two of the three Evangelists in Dog Will Have His Day – Marc and Mathias – who help ex-special investigator Louis Kehlweiler, to uncover the mystery surrounding a tiny fragment of human bone Louis had found.

Louis is another one of Vargas’ eccentric characters, known variously as Ludwig/Louis, the son of a French woman and a German soldier, he carries Bufo, a toad, around in his pocket and even talks to it. Even though he is retired he still keeps newspaper cuttings and files on any criminal activity of any kind, which is where Marc helps him. And he also still keeps watch on all his observation posts, numbering the public benches and even trees in the Paris parks.  Sitting on bench 102 one evening he had seen a pile of dog excrement on a grid around a tree. This annoyed him – he didn’t like his lookout posts to be fouled – but the next morning the rain had washed the grid clean and all that remained from the dog poo was the tiny bone. The bone, which turned out to be the top joint of a big toe, probably that of an elderly woman, convinces Louis that a murder has taken place. And, of course, he has to find out who it had belonged to and what had happened.

His search takes him and Marc to a small fishing village in Finistére in Brittany, where they are later joined by Mathias, in the hope of identifying the victim and the murderer. There Louis not only comes across an ex-girlfriend, discovers the answer to a mystery in his own family history, but he also discovers that an old woman, Marie had been found dead on the beach. It had been recorded as an accidental death but Louis is convinced she was murdered – but who killed her and why?

This really is a strange murder mystery, full of bizarre events and characters – plus an extraordinary machine that prints out vague answers to questions. I found it compelling reading. I see from the synopsis of The Accordionist that Louis is also in the third book in the series with the three ‘Evangelists’ – I’m hoping my reserved copy will be available from the library soon.

3 thoughts on “Dog Will Have His Day by Fred Vargas”