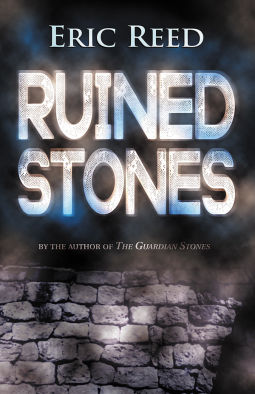 Ruined Stones combines two of my favourite genes – crime fiction and historical fiction. It’s set in Newcastle upon Tyne in 1941 during the Second World War, where Grace Baxter, who has recently moved from Shropshire, is working in the Women’s Auxiliary Police force in a small sub-station. As the young policemen have joined up, the police are recruiting women but their duties are restricted and they can’t make arrests.

The body of a young unidentified woman is found in the ruins of a Roman temple not far from the police station. Grace is assigned to interviewing the neighbours but no one admits to seeing or hearing anything suspicious during the night due to the blackout and the fog. The police initially think it could have been an accident or suicide, but why are the victim’s legs and arms arranged into the ancient symbol of the reverse of the Nazi swastika?

Grace comes from a line of ‘wise women’ and is sensitive to the remains of the Roman temple, sensing something unthinkably old and powerful in the pagan ruin. Then another body is found, implicating Mavis, Grace’s landlady, although there are number of other suspects as well.  Mavis, is viewed with suspicion by her neighbours because of her friendship with a Dutch refugee, Hans, who some believe to be a German. When the murdered man is identified as Mavis’ husband, Grace finds her life in great danger as she investigates the mystery and finally discovers the culprit.

I enjoyed this mystery, with its convincing characters, set against the backdrop of the war, as the Germans repeatedly bomb Newcastle and the inhabitants seek shelter in the crypt of the local church, which takes a direct hit. It provides an interesting look at life during the war, complete with black marketeers and criminals taking advantage of the blackout, and the prejudice and fear shown to foreigners and strangers. I was also interested to see the attitudes to women and their work for the police during the war and the hostility towards them from the public and from police officers. And I also enjoyed the hint of the supernatural through Grace’s own background.

This is the second book featuring Grace Baxter – the first is The Guardian Stones, set in the remote Shropshire village of Noddweir, where Grace’s father was the village constable until he joined the armed forces at the start of the war.

‘Eric Reed’ is the pen name of husband and wife, Mary Reed and Eric Meyer. Mary spent her early life in Newcastle and the setting in this city is depicted as it was in 1941, apart from two imaginary streets. The temple ruins, dedicated to the local god Antenociticus, still exist – you can see a photo and information about it on the English Heritage site. There is a glossary of Geordie dialect words and phrases included in the novel at the end of the book.

Many thanks to the authors and Poisoned Pen Press for a review copy.