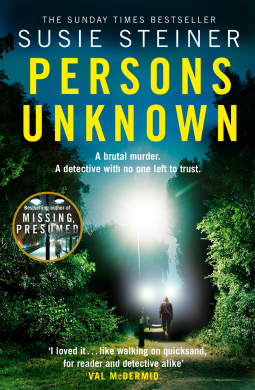 A brutal murder. A detective with no one left to trust.

As dusk falls a young man staggers through a park, far from home, bleeding from a stab wound. He dies where he falls; cradled by a stranger, a woman’s name on his lips in his last seconds of life.

DI Manon Bradshaw can’t help taking an interest – these days she only handles cold cases, but the man died just yards from the police station where she works.

She’s horrified to discover that both victim and prime suspect are more closely linked to her than she could have imagined. And as the Cambridgeshire police force closes ranks against her, she is forced to contemplate the unthinkable.

How well does she know her loved ones, and are they capable of murder?

I loved Missing, Presumed (link to my post) so I was keen to read Persons Unknown. They are both written in the present tense which, if you read my blog regularly you will know, I usually find irritating. But for some unknown reason it didn’t bother me and as I read the books I completely forgot about the tense and was totally immersed in the mysteries. Persons Unknown is just as good, if not better than Missing, Presumed.

Although it’s the second Manon Bradshaw book I think it works well as a standalone book, particularly as her circumstances have changed since the end of the first book. She has moved from London to Cambridge and she and her adopted son Fly, aged twelve, are living with her sister Ellie, and Ellie’s nearly three-year-old son Solly. Fly is struggling to fit into school, a vast comprehensive school where he is the only black boy in the school, and Manon is five months pregnant and working on cold cases. She would have loved to be included in the investigation into the murder of Jon-Oliver Ross who was found stabbed to death in the local park. But that’s not possible when Ellie identifies him as Solly’s father and Fly is a suspect after he is spotted on CCTV near the body.

What I particularly like about this book is that it follows the events as they occur without flashbacks and although it’s a complicated story I found it easy to follow all the twists and turns and the multiple viewpoints. The characters are totally believable, their personalities clearly defined and explored with psychological depth. A number of issues are raised, such as the mix of work and home life, childcare and motherhood and racial prejudice. Manon, as the main character, stands out but some of the other characters, such as Birdie, the shopkeeper and Mark Talbot, a lawyer, who agrees to help Manon, are also memorable. At the same time it is tense and gripping as the events that led up to the murder are revealed.

Many thanks to The Borough Press/Harper Collins for a review copy via NetGalley.