I was a bit doubtful that I would like Missing, Presumed by Susie Steiner as it’s written in the present tense, which I usually find irritating. But I needn’t have been concerned because it wasn’t long before I’d completely forgotten the tense and I was totally immersed in the story. And I loved it. 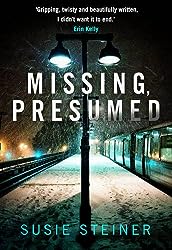 Missing, Presumed is crime fiction, investigating the disappearance of Edith Hind, a beautiful Cambridge post-grad.  Her boyfriend, Will Carter had returned to their flat to find the front door open, coats in disarray and a spatter of blood on the kitchen floor. It’s told from different characters’ viewpoint, each one individually distinct, beginning with DS Manon Bradshaw on the Major Incident Team (her name means ‘bitter’ in Hebrew, but I thought it was Welsh), a lonely disillusioned single woman approaching forty, who overcomes her insomnia by listening to the low murmurings of police reports on her radio.

Edith’s mother, Miriam, Lady Hind, is distraught, wondering if somehow this is fault, her daughter the centre of a drama. Sir Ian Hind, a successful doctor, physician to the Royal Family and a friend of the Home Secretary adds to the pressure the police are under to find Edith. Edith’s friend, Helena comes under suspicion and known offenders are interviewed, but after the first 72 hours she is still missing. The team’s urgency is cooling  as the possibility that Edith is still alive diminishes. Then a dog walker finds a body in the Ouse, near Ely; is it Edith? The search for the killer is intensified.

This has all the ingredients of a successful crime novel for me. My only criticism of the book is that I didn’t think the final section, ‘One Year Later‘ in which the ends are tied up , was necessary. But apart from that I found it gripping and intense. I was intrigued by the multi-layered plot, and thought the characters were fully rounded, believable people, explored with psychological depth – in particular Manon Bradshaw stands out. And, best of all, it is beautifully written.

Susie Steiner is a novelist and freelance journalist. She began her writing career as a news reporter first on local papers, then on the Evening Standard, the Daily Telegraph and The Times. In 2001 she joined The Guardian, where she worked as a commissioning editor for 11 years. For more information see her website, susiesteiner.co.uk

My thanks to Lovereading for providing an advance proof of this novel, due to be published in February 2016. Missing, Presumed is Susie Steiner’s second book ‘“ the first is Homecoming, which I really must read.

And I do hope she will write more about DS Manon Bradshaw.

One thought on “Missing, Presumed by Susie Steiner”