There are two memes I take part in on Wednesdays:

Currently reading: I have three books on the go at the moment,  – The Grapes of Wrath by John Steinbeck, from my TBR shelves.  I’m only up to chapter 3 so far but I’m enjoying his descriptive writing so much as Tom Joad returns to his family home in Oklahoma during a drought as a storm blew up and dust clouds covered everything. Tom, convicted of homicide has just been released from prison after serving four years of a seven year sentence.

I’m also reading Her Hidden Life by V S Alexander, a novel set in Germany during the Second World War, about the life of Magda, one of Hitler’s food tasters. See yesterday’s post for the opening paragraph and synopsis. I’m in chapter 6 at the moment when Magda sees photos taken by an SS officer at Auschwitz, that show that Hitler is lying about how the Reich is dealing with Jews and prisoners of war near the Eastern front.

The third book I’m reading is The Summer Before the War by Helen Simonson, about the  summer of 1914, set in Rye in East Sussex when spinster Beatrice Nash arrived to teach at the local grammar school. Her appointment was the result of Agatha Kent’s and Lady Emily Wheaton’s wish to have a female teacher as a Latin teacher. I’m in the middle of chapter 5 in which Beatrice is at Lady Emily’s annual garden party with the school governors, the Headmaster and staff and some of the local dignitaries. I’m finding it rather slow-going so far.

The last book I finished is Belinda Bauer’s latest book Snap, one of my NetGalley books. It’s crime fiction about Jack and his sisters and what happens to them after their mother is murdered. Belinda Bauer’s books are so original, full of tension and suspense. I’ll write more about it in a later post.

What do you think you’ll read next: I shall probably read The Inheritance by Louisa May Alcott next, or if not next then by the end of the month as it’s the book chosen by my book group for our May meeting. 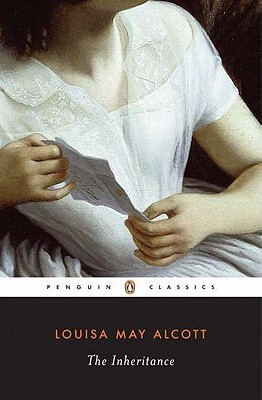 Written in 1849, when Louisa May Alcott was just seventeen years old, this is a captivating tale of Edith Adelon, an impoverished Italian orphan who innocently wields the charms of virtue, beauty, and loyalty to win her true birthright. Her inheritance, nothing less than the English estate on which she is a paid companion, is a secret locked in a long-lost letter. But Edith is loath to claim it _ for more important to her by far is the respect and affection of her wealthy patrons, and the love of a newfound friend, the kind and noble Lord Percy. This novel is Alcott writing under the influence of the gothic romances and sentimental novels of her day. The introduction considers early literary influences in the light of Alcott’s mature style