This week I’m featuring one of my NetGalley books,  Her Hidden Life by V S Alexander, a newly published book (3 May 2018), that I’m currently reading. 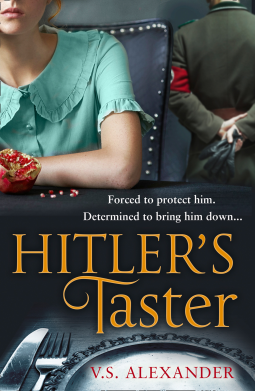 Who killed Adolf Hitler? The answer lies within these pages. The circumstances surrounding his death have been disputed since 1945, but I know the truth. I was there.

A forbidden love. A deadly secret.

‘An absorbing, well-researched story that brings to life an extraordinary period in history’ GILL PAUL, bestselling author of The Secret Wife

I like it when an author clearly distinguishes what is real and what is fictional in a historical novel and she has done so in this case in her Author’s Note. Her Hidden Life is loosely based on the life of Margot Woelk, one of Hitler’s tasters, a woman who kept her former job a secret until she was ninety-five. It is not intended to be a strictly historical account of the Third Reich and the author states that she has relied on many sources, some of  which differed.