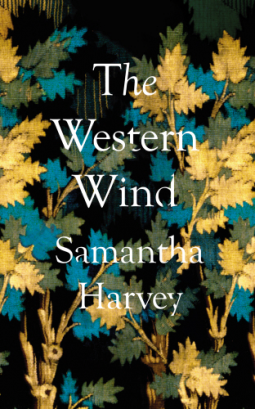 The Western Wind really is an extraordinary book. I was drawn into the story right from the start. Samantha Harvey’s writing brings to life the sights, smells and sounds of the daily life of the ordinary people living in Oakham, a small village in Somerset  in 1491. So often in historical fiction it’s about the notable historical figures of the period that are the main characters – here there none (although there is a reference to their bishop who is in prison for trying to put a pretender on the throne (Perkin Warbeck had first claimed the English throne in 1490).

A man disappears, presumed drowned – but how and why did he die? Oakham, an impoverished village is isolated, cut off from the surrounding villages and from the monks at the abbey in Bruton by the river with its bends and oxbows, and the long woody ridge to the north-east edge of the village. There are no outsiders.

I thought the way Samantha Harvey reveals how Thomas Newman died telling the story moving back day by day to the day of his death was very effective, although at first I was a bit puzzled. By the end – that is – on the day Thomas Newman disappeared – we know so  much about him and his neighbours, mainly through the confessions they made to the narrator, John Reve, the village priest. And the sequence of events, the why and the how are revealed.

The people are superstitious, living in fear of the whims and punishments of God and taking everything as a warning. Reve tries to reassure them that the creatures they fear, such as wolf-men and grotesque sea creatures don’t exist, but that there are ill spirits to test us and strengthen us; that what we call good or bad luck are spirits, that live in the air or in the water and that we can conquer them. Reve prays for a sign that Newman was on his way through purgatory safely to heaven. The wind is blowing from the east, a strong and bitter wind, so he prays for a wind from the west to blow the ill spirits away.

This is in some ways an allegorical tale, with the characters standing for symbolical figures, and events as symbols of change. Hence there is Newman, a relative newcomer to the village the bringer of change as he gradually bought land off Townshend, the lord of the manor, now impoverished. Does this make him a suspect for Newman’s death?

The monks, who it is said are keen to buy the village land, also foreshadow the changes that are to come in the next half century or so. Reve, the priest (my Local Historian’s Encyclopedia tells me a reeve was usually a man of villein status who organised the daily business of the manor) is concerned that people are no longer coming to him for confession but paying a travelling friar, who didn’t know them, for a confession incognito. The people are losing their faith in God.

I loved other details, setting the book in the 1490s – the techniques of bridge building, the traditional games such as ‘campball’ (the precursor of football) played by all the young men of the parish with a pig’s bladder up and down the village road, the cock-fighting, the food and drink – spiced beer and metheglin (a variety of mead), giving out the sweetness of honey, and the music – the tinkling of tambourines, pipes and drumming on goat-hide.

I came to the end of this book and immediately wanted to start it again. What seems at first to be a simple tale is actually a multi-layered and complex book. I really enjoyed reading it.

Samantha Harvey is the author of four novels, The Wilderness, All Is Song, Dear Thief and The Western Wind.

Her novels have been shortlisted for the Orange Prize for Fiction, the Guardian First Book Award and the James Tait Black Prize, and longlisted for the Man Booker Prize, the Baileys Prize and the Jerwood Fiction Uncovered Prize. She won the AMI Literature Award and the Betty Trask Prize. She lives in Bath, UK, and is a Reader in creative writing at Bath Spa University.

My thanks to Jonathan Cape for a review copy via NetGalley.

6 thoughts on “The Western Wind by Samantha Harvey”