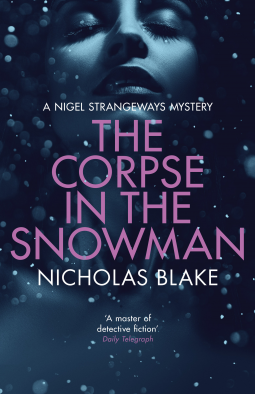 Publication date 2017, Ipso Books, 305p. First published as The Case of the Abominable Snowman in 1941 by Collins UK (The Crime Club)

Review copy from the publishers, Ipso Books, via NetGalley

I enjoyed The Corpse in the Snowman by Nicholas Blake* a vintage murder mystery with a complicated plot. There’s a death and a body hidden in a snowman that is only discovered when a thaw sets in. It is set in 1940 in an isolated country house with a closed cast of characters and an amateur detective, Nigel Strangeways, helping the police and eventually solving the mystery. There are numerous twists and turns and red herrings before the murderer is revealed.

Easterham Manor in Essex, the home of the Restorick family is cut off from the neighbouring village by snow. Strange things have been going on. On Christmas Eve the family and their guests had gathered in what was said to be a haunted room waiting to see if the ghost would appear when  Scribbles, the family cat  sprang at a corner of the room and repeatedly struck her head against the wall and turned herself into a whirling dervish.

Some weeks later Nigel Strangeways and his wife Georgia  have been invited by Georgia’s cousin, Clarissa to stay at the Manor’s Dower House to investigate the cat incident. The next morning Elizabeth Restorick is found hanged and naked in her room, a hint of a smile playing on her painted lips. Was it suicide, or a murder made to look like suicide? Nigel is convinced it was murder and finds there are plenty of suspects. Elizabeth was a drug addict – so, was she killed by the doctor who was treating her addiction, or by Will Dykes, a romantic novelist in love with Elizabeth, or her friend Miss Ainsley, described as a ‘nondescript sort of fribble‘ -a frivolous or foolish person – or by one of the family?

The title and the first chapter give away a vital element of the plot – the snowman, built by the Restorick children, twins John and Priscilla, melts to reveal a corpse hidden inside. But at this point the identity of the corpse is unknown and as I was reading the rest of the book I kept trying to work out who it could be. It wasn’t too difficult, but it did detract a little from the mystery and I didn’t enjoy it as much as his earlier book Malice in Wonderland.

*Nicholas Blake was the pseudonym of Poet Laureate Cecil Day-Lewis (1904 – 1972), one of the leading British poets of the 1930s. He began writing mysteries in 1935 to supplement his income from poetry and published his first Nigel Strangeways detective novel, A Question of Proof in 1935. The Corpse in the Snowman aka The Case of the Abominable Snowman is the 2nd in the series.

7 thoughts on “The Corpse in the Snowman by Nicholas Blake”