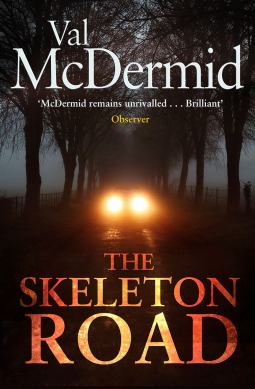 The Skeleton Road by Val McDermid is the third of her DCI Karen Pirie novels. Investigating the identity of the skeleton found, with a bullet hole in its skull, on the rooftop of a crumbling, gothic building in Edinburgh takes Karen and her Historic Cases Unit into a dark world of intrigue and betrayal during the Balkan Wars in the 1990s.

It begins slowly, introducing rather a bewildering number of characters one after the other. It moves between the past and the present in Scotland, England and Croatia, told through different viewpoints, and interweaving the sequence of events in the past and the present in a way that I found rather disjointed. Dr River Wilde a forensic anthropologist, discovers that the skeleton is a male, he’d been dead between five and ten years and his dental work shows he was originally from one of the Eastern bloc countries.

It’s a complex story with several strands, including the search for war criminals through the work of two lawyers at the International Criminal Tribunal for the former Yugoslavia. Karen’s investigations take her to Oxford and then to a small village in Croatia, a place scarred by fear, where people have endured unspeakable acts of violence.

At times I thought I was reading an account of the wars and the search for justice and revenge rather than a murder mystery. Even given the traumatic events it describes I didn’t feel there was much tension in the search for the killer and I was able to figure out who it was fairly quickly. I enjoyed the sections focusing on Karen’s and her assistant DS James, ‘the Mint’ Murray’s detective work, and I liked all the details of her relationship with her partner, Phil (also a police officer, now working on a different team).  But I didn’t enjoy this as much as the first two Karen Pirie books – in fact I think the first book, The Distant Echo is by far the best.

7 thoughts on “The Skeleton Road by Val McDermid”