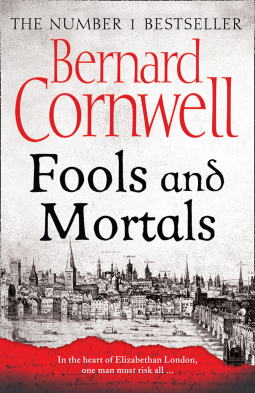 Source: Review copy from the publisher via NetGalley

I can’t comment on how much of a departure this is for Bernard Cornwell as this is the first book of his that I’ve read. What I can say is that I loved this book, that Bernard Cornwell is a great storyteller and if the rest of his books are like this I’ve found a ‘new’ favourite author! I was quickly drawn into the complexities of life in the Elizabethan theatre.

It’s just the sort of historical fiction that I enjoy, bringing the past to life, with drama and an interesting cast of characters. I’ve read a few non-fiction books about the Elizabethan era and about William Shakespeare but I knew nothing about Richard Shakespeare, his younger brother. William doesn’t come across as a very likeable character, particularly in the early part of this book. Richard is longing to play a male role, but so far has only been given female roles and there is little brotherly love between them. Richard is persistent though, determined to make William see that he can play a bigger role.

It’s 1595 and the players are rehearsing a new play, A Midsummer Night’s Dream, to be performed at the wedding of Elizabeth Carey, the daughter of the Lord Chamberlain, Lord Hunsdon (the patron of the Lord Chamberlain’s Men). I loved all the details of the rehearsals, the rivalries between the actors, and the competition with other theatre companies in London – the Swan in Southwark is under construction and Francis Langley, the producer, is looking for both playwrights and actors. As Richard seems to be getting nowhere in persuading William to give him a better and a male role he is tempted to leave the Lord Chamberlain’s Men when Langley offers him a job, providing he will steal two of his brother’s new plays. There’s also the added problem of the Puritan opposition to the theatre, looking for hints of heresy, papists and to bring to justice traitors who would kill the Queen.

I like Cornwell’s Historical Note in which he gives an account of the development of the professional theatre in the late 16th century. In 1595 Shakespeare’s company played at the Theatre in Shoreditch – the Globe was a later building, built in 1599. The playhouses were large and could accommodate around 2,000 people (the new Swan theatre around 3,000 people), comparable to today’s largest theatres in London, or New York. The puritan opposition meant that all the playhouses were built outside the City of London’s boundaries. And it was Queen Elizabeth’s patronage  and that of the nobility that saved them.

He goes into much more detail too – about the structure of the playhouses, the plays and other entertainments they performed and most interesting – to me anyway – whether the companies used a director, using for evidence the production of Pyramus and Thisbe, the play within a play in A Midsummer Night’s Dream.

I was spellbound by the whole book, complete with a love story, jealousy and intrigue in abundance.

6 thoughts on “Fools and Mortals by Bernard Cornwell”