This week’s first paragraph is from a library book that I’ll be reading soon, Falling in Love by Donna Leon. It’s the 24th Commissario Brunetti novel. 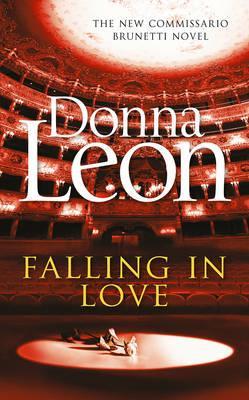 The woman knelt over her lover, her face, her entire body stiff with terror, staring at the blood on her hand. He lay on his back, one arm flung out, palm upturned as if begging her to place something into it; his life, perhaps. She had touched his chest, urging him to get up, so they could get out of there, but he hadn’t moved, so she had shaken him, the same old sleepy-head who never wanted to get out of bed.

Blurb (from back cover):

As an opera superstar at La Fenice in Venice, Flavia is well acquainted with attention from adoring fans and aspiring singers. But when anonymous admirer inundates her with bouquets of yellow roses, which start to appear in her dressing room and even inside her locked apartment, she begins to fear for her safety and calls in an old friend.

But soon the threat becomes more serious. Brunetti must enter the psyche of an obsessive fan and find the culprit before anyone, especially Flavia, comes to harm.

I’ve only read a few of the Brunetti novels and certainly not in the order they were written. Apparently Flavia appeared in the first book, Death at La Fenice, in which Flavia Petrelli, one of Italy’s finest living sopranos had been the prime suspect in the poisoning of a renowned German conductor – until Brunetti cleared her name.

This title doesn’t say this book is crime fiction to me. What do you think?