I’ve been rather neglecting my TBRs so far this year, so I’ve been going through them deciding which one to read next and came across Caedmon’s Song by Peter Robinson, one of his standalone books. 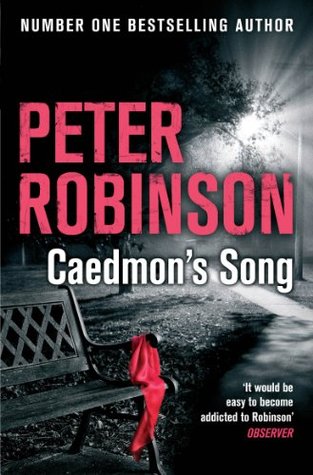 Martha Browne arrived in Whitby one clear afternoon in early September, convinced of her destiny.

Kirsten looked away towards the window. Outside, beyond the flowers, and the get-well cards on her table, she could see the tops of trees swaying slowly in the wind and a distant block of flats, white in the July sun, ‘I don’t know if I want to remember,’ she whispered. ‘I feel so empty.’

On a balmy June night, Kirsten, a young university student, strolls home through a silent moonlit park. Suddenly her tranquil mood is shattered as she is viciously attacked.

When she awakes in hospital, she has no recollection of that brutal night. But then, slowly and painfully, details reveal themselves – dreams of two figures, one white and one black, hovering over her; wisps of a strange and haunting song; the unfamiliar texture of a rough and deadly hand . . .

In another part of England, Martha Browne arrives in Whitby, posing as an author doing research for a book. But her research is of a particularly macabre variety. Who is she hunting with such deadly determination? And why?

I’ve enjoyed reading some of Peter Robinson’s Inspector Banks books. Caedmon’s Song, described as a ‘psychological thriller‘ looks a bit different and I’m wondering about Martha’s research – is it connected to Dracula? after all Whitby Abbey was Bram Stoker’s inspiration for his novel, Dracula.