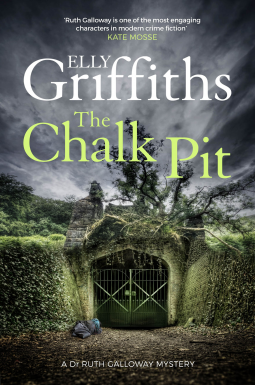 Boiled human bones have been found in Norwich’s web of underground tunnels. When Dr Ruth Galloway discovers they were recently buried, DCI Nelson has a murder enquiry on his hands. The boiling might have been just a medieval curiosity – now it suggests a much more sinister purpose.

Meanwhile, DS Judy Johnson is investigating the disappearance of a local rough sleeper. The only trace of her is the rumour that she’s gone ‘underground’. This might be a figure of speech, but with the discovery of the bones and the rumours both Ruth and the police have heard that the network of old chalk-mining tunnels under Norwich is home to a vast community of rough sleepers, the clues point in only one direction. Local academic Martin Kellerman knows all about the tunnels and their history – but can his assertions of cannibalism and ritual killing possibly be true?

As the weather gets hotter, tensions rise. A local woman goes missing and the police are under attack. Ruth and Nelson must unravel the dark secrets of The Underground and discover just what gruesome secrets lurk at its heart – before it claims another victim.

The Chalk Pit is the 9th in Elly Griffiths’ Ruth Galloway books. It’s written in the present tense which I find somewhat jarring (strange because in other books such as Eyes Like Mine, which I reviewed in this post, I hardly noticed the tense). But I did enjoy this book because of the characters, in particular Ruth, her daughter, Kate (now nearly 6 years old), DCI Harry Nelson and his wife Michelle, DS Clough, DS Judy Johnson and Cathbad, the part-time druid, who now looks after their two young children. I also like the archaeological investigations, although in The Chalk Pit that is not the main focus.

It centres on the plight of homeless people and the maze of tunnels under Norfolk. The bones are found during the excavations when an underground restaurant in one of the tunnels is proposed. One of the homeless women, Barbara, disappears and there are rumours that she has ‘gone underground‘. It becomes a murder mystery when two more of the homeless, ‘Aftershave Eddie’ and then ‘Bilbo’ are found dead, both stabbed. Then two local women go missing – Sam who has four children and Cassandra, Clough’s partner (they have one child). And it soon becomes clear that all these events are linked.

There is a Who’s Who of the main characters at the end of the book giving their backstories which helps if you haven’t read the earlier books. But I think it really helps to read the Ruth Galloway books in order as the recurring characters’ lives progress with each one, making it difficult to write much more about The Chalk Pit without giving away spoilers. I’ll just add that one of my favourite characters, Cathbad, doesn’t have a large role, which disappointed me. And I really would prefer if Elly Griffiths had written this in the past tense as she has in her Stephens and Mephisto series, which I prefer.

My thanks to the publishers and NetGalley for an ARC of this book which will be published on 23 February 2017.

7 thoughts on “The Chalk Pit by Elly Griffiths”