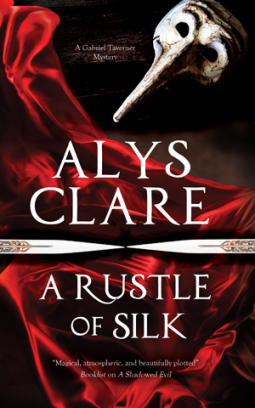 Alys Clare is a new-to-me author and I don’t know why I’ve never come across her books before now. She writes historical mysteries. Her latest book, A Rustle of Silk, published today, is the first in a new series featuring Dr Gabriel Taverner, set in the early years of 17th century England.

It begins in April 1603 at the beginning of James I’s reign. Former ship’s surgeon Gabriel Taverner has settled in Devon near his family and he is trying to set up a new practice as a physician. But it is not easy to gain the locals’ trust and someone is leaving gruesome little gifts on his doorstep. However, the local coroner, Theophilus Davey asks him to examine a partially decomposed body found beside the river. At first it looks as though it was suicide, but on realising that it’s his brother-in-law, Jeromy, Gabriel and Theophilus are convinced that he was murdered.

Jeromy was employed by a silk merchant and moved in the world of the rich and influential, often away from home and his wife Celia. Outwardly they have a happy marriage, but as Gabriel finds out more disturbing secrets begin to emerge. The silk trade is a dangerous business and Gabriel finds his own life is threatened.

There are several things that I loved about this book. It’s a convincing view of the 17th century and I was fascinated most of all by the detail of medical practices, and how Gabriel interacted with the local women (‘witches’) who treated the poor and was willing to take note of their knowledge, particularly concerning women – as a ship’s surgeon he had no experience of treating women. It also shows what life was like at that time for the ordinary people, the position of women in society, and the consequences of committing suicide.

I also liked the mystery, with plenty of red herrings and intrigue. It kept me interested, anxious to know the outcome. I guessed who the murderer was about half-way through the book, which was satisfying, but it was the historical aspect that captivated me.

My thanks to the publishers via NetGalley for my copy of this book.

3 thoughts on “A Rustle of Silk by Alys Clare”