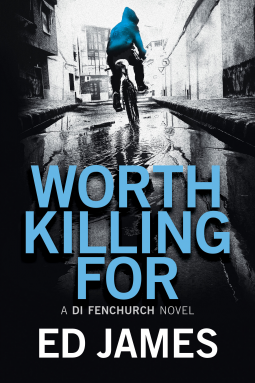 Set in East London, Worth Killing For by Ed James is the second DI Fenchurch novel. It’s a bang up to date police procedural full of action, street talk and social and political commentary. I haven’t read the first book in the series, but that doesn’t matter as this book reads well as a standalone. It starts off at full tilt as Fenchurch witnesses a murder as a woman is attacked by a young hoodie on a bike, who snatches her mobile and handbag. He sets off in pursuit and after losing sight of him a couple of times he catches him, finding he has several smartphones in his possession, but not the victim’s. The young man claims he hadn’t attacked the woman, who is identified as a journalist, Saskia Bennett. Is it a case of mistaken identity, or as Fenchurch maintains the young man is lying? Is Saskia the victim of a phone-theft gang, run by the mysterious Kamal, or was she killed because of the stories she was investigating?

This reminded me so much of ‘Oliver Twist’, young boys recruited by Fagan to ‘pick-a pocket-or two’ and I was fascinated by the intricacies of the plot. I got a bit lost in the descriptions of the bike chases – there is more than one – but they certainly provide plenty of tension. And the scene in the underground is terrific. It is fast-packed action and you have to concentrate to keep up. Fenchurch is an interesting character and there is enough back story about his missing daughter, Chloe, to explain why he ignores procedure in his obsession to get to the truth.

I had no idea who was responsible, and at times the street talk and police jargon left me puzzled, but after I’d read more of the book it became clearer. I liked the way Ed James bamboozles the reader with all the twists and turns in the plot and the way he has brought politics, both local and national into the story. It really is right up-to-date.

In an Afterword Ed James explained how he came to write this book – his iphone was nicked, by a kid on a bike, in London. He poured out all his anger, hatred and fear into his writing.

I read this book courtesy of NetGalley. I’ll certainly read the first book now and any later DI Fenchurch books – will he find out what happened to Chloe?

Ed James writes crime fiction novels, predominantly the Scott Cullen series of police procedurals set in Edinburgh and the surrounding Lothians. He lives in the East Lothian countryside, 25 miles east of Edinburgh, with his girlfriend, six rescue moggies, two retired greyhounds, a flock of ex-battery chickens and rescue ducks across two breeds and two genders (though the boys don’t lay eggs). While working in IT for a living, Ed wrote mainly on public transport but now writes full time. (From his website)

One thought on “Worth Killing For by Ed James”