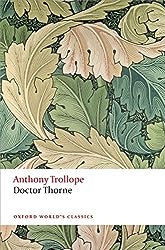 I’ve recently read Anthony Trollope’s Doctor Thorne, which I’d meant to read about a year ago after I finished Barchester Towers! I enjoyed it, although I think it’s a bit too drawn out – I could see where the plot was going very early in the book. The conclusion is predictable.

But that didn’t matter as it’s a book about mid nineteenth-century prosperous country life and the traditional attitudes towards the accepted codes of conduct, of the importance of birth, of wealth and above all about money, class and power. It’s about human relationships and the strength of the novel is in the portraits of its characters and their responses to matters of principle in the face of upper class idiocy and snobbishness. Trollope uses gentle satire in this novel, emphasising the absurdities of the class divisions in society and poking fun at the professions, with the names of doctors, such as Dr Fillgrave, whose name wouldn’t inspire me with confidence, parliamentary agents such as Mr Nearthewind and Mr Closerstil and lawyers called Messrs Slow and Bideawhile.

Doctor Thorne is the third in Trollope’s Barchester Towers books – the first one not set in Barchester, but in Greshambury in East Barsetshire, where the Gresham family and Doctor Thorne and his niece Mary live. As the novel opens nothing is going well for the Gresham family, they are in financial difficulties, the estate is mortgaged and they are heavily in debt. It is imperative that Frank, the son and heir to Greshambury Park and its estate, should marry money – indeed, his mother, Lady Arabella, the sister of the Earl de Courcy insists ‘He must marry money‘, a refrain that is repeated throughout the novel. But Frank has fallen in love with Mary, who has neither money or rank, and is illegitimate and as the story proceeds she is increasingly ostracised by the Gresham family, egged on by their rich relations the De Courcys.

Although the book is called Doctor Thorne, the main character to my mind is Mary Thorne, who shows great strength of character throughout. Mary had been adopted by Doctor Thorne, after her father, his brother had been murdered by her mother’s brother. Her mother had left England for America, where she had married and had a family. The brother, meanwhile had done well for himself after he left prison and made a fortune. Mary knows nothing of her background.

I particularly liked Miss Dunstable, the daughter of ‘the ointment of Lebanon man‘, who had inherited £200,000 when he had died recently. The Gresham family, or rather Lady Arabella, instruct Frank that he is to ask her to marry him – her wealth over-riding the fact that her father was a tradesman.

My only criticism of this book is that the discussions about whether Frank and Mary should or should not be allowed to marry are too drawn out and slowed down the plot too much for my liking. Apart from that I thought it was good, Trollope’s authorial comments were interesting, the dialogue was realistic and lively and the main characters came over as real people. An entertaining novel and now I’m keen to read the next Barchester Towers book, Framley Parsonage; Doctor Thorne also appears in this book!

In his Autobiography Trollope wrote that he had been trying to think up a new plot and he asked his brother to sketch one for him, which he did! He thought it was a good plot and the book was, he believed, the most popular book he had written. He was surprised by its success.

After I finished reading Doctor Thorne I realised that it was a perfect choice for the What’s in a Name? Challenge in the category of a book with a profession in the title. It’s a book I’ve had since before 1 January 2016 and fits into the Mount TRB Reading Challenge too and it’s also a book I identified for the Classics Club Challenge.

I wanted to read Doctor Thorne before the three-part adaptation of the book that starts tonight on ITV at 9 pm, so that my reaction to it wouldn’t be influenced. Now that I have read it I’m not at all sure I’ll watch the adaptation. If there are too many changes I know it will irritate me.