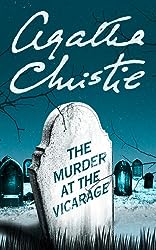 Ingenious! That’s what I thought when I’d finished reading The Murder at the Vicarage. Although Agatha Christie had written short stories featuring Miss Marple this is the first full length Miss Marple story, published in 1930.

I’ve been reading my way through Agatha Christie’s crime fiction for a few years now, totally out of order, which is why I’ve only just got round to reading The Murder at the Vicarage. I’d picked up along the way on the fact that Miss Marple uses her knowledge of people to help her solve the mysteries she investigates. And it is in this book that her use of analogy is made absolutely explicit, as she considers who could have killed Colonel Prothero, the unpopular churchwarden, found in the vicar’s study shot through the head. She comes up with seven suspects, all based on examples of human behaviour she has observed in the past.

Miss Marple is not the popular figure she appears in the later books as not everybody likes her. The vicar does, liking her sense of humour, and describing her as ‘a white-haired old lady with a gentle appealing manner’, whereas his wife describes her as ‘the worst cat in the village. And she always knows everything that happens – and draws the worst inference from it.‘

But it is very helpful to know what is going on in St Mary Mead, about Dr Stone, a well-known archaeologist superintending the excavation of a barrow on Colonel Protheroe’s land and about Mrs Lestrange, a mysterious woman who has recently moved to the village and also about who was coming and going to the vicarage and when.

It’s also helpful to have a a plan of St Mary Mead, showing where the main characters live, and plans of the layout of the vicarage and the vicar’s study, where the murder occurred.

After one of the suspects confesses to the murder Inspector Slack, who shows his contempt for Miss Marple, thinks the case is closed, but Miss Marple is puzzled – the facts seem to her to be wrong. The Murder at the Vicarage has an intricate plot, is full of red herrings and was impossible for me to unravel, but Miss Marple with her knowledge of ‘Human Nature’ solves the mystery.

I enjoyed this book very much, but Agatha Christie writing her Autobiography years later, wasn’t all that pleased with it. She thought it had too many characters and too many sub-plots; she is probably right. But she thought that the main plot was sound and that the village was as real to her as it could be. It’s real to me too.

7 thoughts on “The Murder at the Vicarage by Agatha Christie”