For once I’m reading a series in the order it was published -Jane Casey’s Maeve Kerrigan books – which is just as well as each one reveals facts from the earlier books. it also means that I can follow the characters as they develop and their changing relationships instead of trying to work out what had happened before. 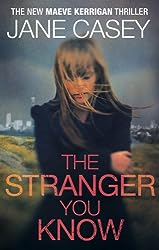 The Stranger You Know is the fourth Maeve Kerrigan book and it’s just as fast-paced and compelling reading as the earlier books – so tightly plotted that I just had to keep on reading to get to the end of the book.

Three women have been murdered in their own homes – strangled and mutilated. There were no signs of a break-in – the women had obviously known and trusted their killer. One of the officers investigating the case voices the unthinkable – there are no leads, no DNA, no CCTV, no parking tickets, ‘it’s like he’s one of us‘. Suspicion lands on Maeve’s boss, DI Josh Derwent, who it turns out had been accused of murder as a teenager. His girlfriend, Angela Poole had been murdered in much the same way as the current victims and he had been the prime suspect.

The focus is squarely on Derwent in this book and he is kept off the investigating team, leaving Maeve to work closely with Chief Superintendent Charles Godley and DCI Una Burt – who hates Derwent. But Maeve cannot believe he could be a killer and disobeys orders not to let him see the evidence. And as Maeve’s boyfriend, Rob is away in America, training with the FBI, the focus is also on the relationship between Josh and Maeve – her loyalty to him as she interviews the people involved in Angela’s murder – Josh’s friends and the police inspector in charge of the case.

It is such a complicated plot and I kept changing my mind about the killer – was it Josh (surely not), was it Angela’s brother or one of the other teenage friends, or were the current murders the result of a copy cat  killer?

I like Maeve, although I do wonder why she is still a DC as she is so good at her job, ferreting out information from the slenderest of clues.  I like Derwent, despite his difficult personality – the spiky relationship between the two of them provides such much needed comic relief in the book. There is a secret in his background that we, the readers, now know along with Maeve – and I’m wondering how long it will be until she tells him, although if he looks on Facebook as she did he’d soon find out. I hope he does – I’d love to see his reaction.

It all comes to a dramatic and thrilling climax as Maeve, once again, comes face to face with the killer – and I’d had a sneaking feeling quite early one who it was, but had dismissed the possibility.

I’m currently reading the next book, The Kill and the sixth book, After the Fire is due to be published on the 18 June.

8 thoughts on “The Stranger You Know by Jane Casey”