I’ve added just a few books this last week. First two e-books- A Man of Some Repute by Elizabeth Edmundson – a Kindle First pick. The paperback is due to be published on 1st July 2015. 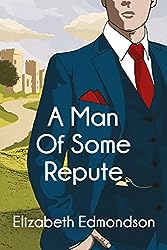 Selchester Castle in 1953 sits quiet and near-empty, its corridors echoing with glories of the past.

Or so it seems to intelligence officer Hugo Hawksworth, wounded on a secret mission and now reluctantly assuming an altogether less perilous role at Selchester.

The Castle’s faded grandeur hides a web of secrets and scandals’”the Earl has been missing for seven years, lost without a trace since the night he left his guests and walked out into a blizzard.

When a skeleton is uncovered beneath the flagstones of the Old Chapel, the police produce a suspect and declare the case closed.

Hugo is not convinced. With the help of the spirited Freya Wryton, the Earl’s niece, he is drawn back into active service, and the ancient town of Selchester is dragged into the intrigues and conspiracies of the Cold War era.

With a touch of Downton Abbey, a whisper of Agatha Christie and a nod to Le CarrÃ©, A Man of Some Repute is the first book in this delightfully classic and witty murder mystery series. 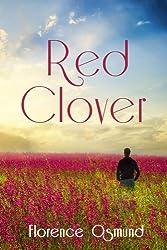 The troubled son of a callous father and socialite mother determines his own meaning of success after learning shocking family secrets that cause him to rethink who he is and where heÊ¼s going. In Lee Winekoop’s reinvention of himself he discovers that lifeÊ¾s bitter circumstances can actually give rise to meaningful consequences.

I was delighted to receive a copy of A Game for All the Family by Sophie Hannah  from Lovereading. It’s due to be published on 13th August: 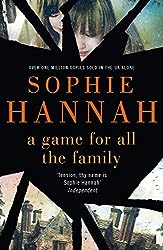 Justine thought she knew who she was, until an anonymous caller seemed to know better… After escaping London and a career that nearly destroyed her, Justine plans to spend her days doing as little as possible in her beautiful home in Devon. But soon after the move, her daughter Ellen starts to withdraw when her new best friend, George, is unfairly expelled from school. Justine begs the head teacher to reconsider, only to be told that nobody’s been expelled – there is, and was, no George. Then the anonymous calls start: a stranger, making threats that suggest she and Justine share a traumatic past and a guilty secret – yet Justine doesn’t recognise her voice. When the caller starts to talk about three graves – two big and one small, to fit a child – Justine fears for her family’s safety. If the police can’t help, she’ll have to eliminate the danger herself, but first she must work out who she’s supposed to be…

Finally this book from the mobile library which visited this week: 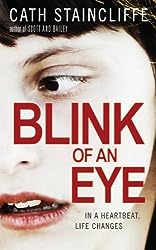 Blink of an Eye by Cath Staincliffe – This one looks good and according to Ann Cleeves (on the back cover) it’s a ‘book about courage and compromise, about how sometimes it’s kinder and braver to lie. Stunning.’

Imagine a sunny Sunday afternoon. A family barbecue. A celebration. Then tragedy strikes. You wake in hospital, traumatized. Your mother tells you about the accident, a nine-year-old dead, your partner bloody and bruised, the lives of three families torn apart.

You face prosecution for causing death by dangerous driving. It could mean 14 years in jail. What have you done?

Do let me know if you’ve read any of these and what you found to add to your shelves this week.