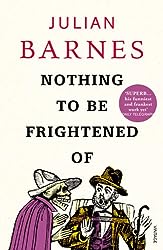 I read Nothing To be Frightened Of over several weeks, reading short sections at a time. This book is described on the back cover by Penelope Lively as:

A maverick form of family memoir that is mainly an extended reflection on the fear of death and on that great consolation, religious belief … it is entertaining, intriguing, absorbing … an inventive and invigorating slant on what is nowadays called “life writing”.

It is a collection of thoughts centred around Barnes’s fear of death and so inevitably he considers the question of religion and especially God – in fact he begins his book with this statement: I don’t believe in God, but I miss him.

Later, he writes, Missing God is rather like Being English, a feeling aroused mainly by attack. When my country is abused, a dormant, if not to say narcoleptic, patriotism stirs. And when it comes to God, I find myself more provoked by atheistic absolutism than by, say, the often bland, tentative hopefulness of the Church of England. (page 77)

His agnosticism doesn’t help him with his fear of dying, but then, again, he thinks that faith does not necessarily remove the fear of death anyway – there are those who fear death among those who have faith as well as among the irreligious.

But this is more than a book about dying because interwoven with his thoughts about his agnosticism and death are anecdotes about his family and himself, thoughts on literature (particularly French literature) and it’s relationship to life. I found it all fascinating,  but it’s his autobiographical passages that I found the most interesting, sharing details about his family’s beliefs and the deaths of his parents and grandparents, of the rivalry between him and his brother, his mother’s solipsism and manipulative behaviour, his father’s seemingly passive approach to life and the difficulties of really knowing a person.

He states that it is easier with fiction than with life – fictional characters are easier to see, whereas in real life ‘the better you know someone , the less well often you see them. … They may be so close as to be out of focus … Often when we talk about someone very familiar, we are referring back to the time when we first properly saw them, when they were held in the most useful -and flattering light – light at the correct focal distance.’ (page 157)

He and his brother have different memories of their parents and grandparents and of their own early relationship, which shows how unreliable memory can be. I suppose I agree more with his brother, the philosopher Jonathan Barnes, who thinks that memories are often false and not to be trusted without external support, rather than Julian, who says he is more trusting, or self deluding, so shall continue as all my memories are true.

This is by no means a gloomy, pessimistic book.  It’s written in an informal tone, almost as though he is talking to the reader, and not being divided into chapters adds to that sense of being involved in a conversation. But is far from being a simple read – there is an awful lot packed into this book, an intensely personal book that reflects the complexity of our views of life and death. It gave me much to think about and even made me chuckle in parts.

And finally thinking about being remembered/forgotten after his death, Barnes considers who will be his last reader because with that reader he will finally be forgotten – and then he reflects that your last reader is, by definition, someone who didn’t recommend your books to anyone else. You bastard! Not good enough, eh? (page 226)

I think it extremely unlikely that I’ll be his last reader!

One thought on “Nothing To Be Frightened Of by Julian Barnes”