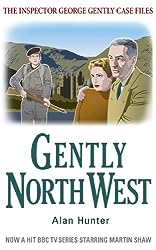 I first came across Inspector George Gently through the TV drama with Martin Shaw as Gently. There are 46 books in Alan Hinter’s Gently series and I’ve  read the first two , Gently Does It and Gently by the Shore and now the 14th book, Gently North West (first published in 1967). The full list of the Gently books is on Fantastic Fiction.  In the TV version Gently is based in Northumberland, whereas the books are mainly set in Norfolk.

There’s blood in the heather and a murderer on the loose when Gently pays a quiet visit to the Highlands of Scotland. Had Brenda Merryn not been such a strong-willed woman and had she not been so much in love with George Gently, driving all the way to Scotland for a holiday with Gently’s sister and brother-in-law might have been a bit of a challenge. Spying on a heavily armed private army of nationalists, being held at gunpoint on the hillside, being held prisoner in a filthy outhouse and becoming involved in a murder would be unthinkable. For Gently, it’s all in a day’s work and his holiday is put on hold while he stalks a murderer in the mountains, with Brenda by his side.

Gently North West is set in the fictitious village of Strathtudlem in Scotland in 1967 where Gently is on holiday with his friend, Barbara Merryn and his sister, Bridget and her husband. There is quite a lot of detailed descriptions not only of the Scottish Highlands but also of the route of Gently’s journey from London to Scotland. On their journey a man with a red beard nearly crashes into Gently’s car.

Then on their first evening in the Highlands, Gently and Brenda go for a walk and see the same man, standing high on a crag above the glen, peering at them through his binoculars.  The next morning, the body of Donnie Dunglass is found, stabbed in the back, face down on the heather near where Gently had seen the man with the red beard. He feels it is his duty to inform the local constabulary about the man he saw and so becomes involved in the search for the killer.

In this book there are several references that set the book firmly in the late 1960s with reference to the Scottish Nationalists ‘ activities during that time and even to Mary Quant. But what particularly interested me about Gently North West is not the actual murder mystery which I think is rather far-fetched, but the fact that Gently is no longer an Inspector working in Norfolk but is living in London, a Chief Superintendent with Scotland Yard. Obviously since the events in the second book Gently had been promoted several times!

Now I’m wondering if I want to read all the books to find out more about Alan Hunter’s Gently.

Alan Hunter was born in Hoveton, Norfolk in 1922. He left school at the age of fourteen to work on his father’s farm, spending his spare time sailing on the Norfolk Broads and writing nature notes for the Eastern Evening News. He also wrote poetry, some of which was published while he was in the RAF during the Second World War. By 1950, he was running his own book shop in Norwich and in 1955, the first of what would become a series of forty-six George Gently novels was published.  He died in 2005, aged eighty-two.

He dedicated Gently North West to his mother, Isabella Hunter, nee Andrews, who was from Culsalmond in Aberdeenshire. In his own words she ‘contrived to possess her son with an indelible prejudice for the land of heroes and poets. Rest her well where she lies and greetings to my unknown Scottish cousins.‘

Reading Challenge: this is the fifth book I’ve read that qualifies for the Read Scotland Challenge 2015.