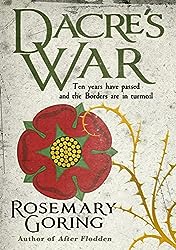 Dacre’s War is compelling reading, a  thoroughly absorbing and beautifully written novel set in the Scottish and English Borders and London between 1523 – 1525 some ten years after the events described in Rosemary Goring’s earlier book, After Flodden. I wondered as I began reading whether it could equal After Flodden, a book I loved when I read it two years ago – it did. I think it even surpasses it.

I loved Dacre’s War and keen as I was to read to the end I didn’t want to leave the characters. Once again I was swept away by the story, re-living the scenes through Rosemary Goring’s vivid descriptions and the drama of the characters’ lives, people who came to life in the pages of this book.

Dacre’s War describes how Adam Crozier, the head of his clan, plots to take revenge on Lord Thomas Dacre, the Warden General of the English Marches and the Keeper of Carlisle, who had brought about the death of Adam’s father. Ten years after the Battle of Flodden, Dacre is the most powerful man in the north of England, but the Marches are a constant battlefield, dangerously out of control, and a hotbed of thieves and killers in thrall to the Warden. Without him Henry VIII believes the situation would be much worse.

It is against this background that Crozier forms an alliance with Dacre’s enemies, both English and Scots to inform Henry of Dacre’s crimes and bring about his downfall.

There are some remarkable scenes in this book, and amongst them are the scenes in the Star Chamber where Dacre is brought to answer the charges against him in front of Cardinal Wolsey and his imprisonment in the Fleet Prison. I felt as though I was there, watching, breathing the same air – not a pleasant experience. Similarly with Crozier, I could visualise his home, Crozier’s Keep, sense the tension and fear as his wife, Louise, is left at home, pregnant and in danger of losing the baby.

There is so much packed in this book, political intrigue, personal conflict and vengeance, and spies, manipulators and double crossers abound. It is impossible to write more without revealing the plot and the eventual ending. It’s a brilliant book.

Dacre’s War is due to be published in June 2015. My copy is a pre-publication review copy courtesy of www.lovereading.co.uk.

Rosemary Goring was born in Dunbar and studied social and economic history at the University of St Andrews; and, after graduation, worked at W&R Chambers as a reference editor. Rosemary was the literary editor of Scotland on Sunday, followed by a brief spell as editor of Life & Work, the Church of Scotland’s magazine, before returning to newspapers as literary editor of the Herald, and later also of the Sunday Herald. In 2007 she published Scotland: The Autobiography: 2000 Years of Scottish History By Those Who Saw it Happen, which has since been published in America and Russia.