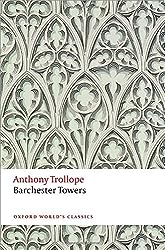 First published in 1857 Barchester Towers, is the second book in Anthony Trollope’s Chronicles of  Barchester series, following on from The Warden.

As I began reading this book I was thinking it’s really slow, very much set in its period detailing the religious and ecclesiastical controversies of its time, but then the story of who was going to succeed the old dean, who was going to be the warden, Mr Harding or Mr Quiverful (with his 14 children) and above all who was going to marry Eleanor, Mr Harding’s widowed daughter took hold of me. Not to mention the odious Mr Slope, chaplain to the new Bishop, the ambitious, but hen-pecked Dr. Proudie and his overbearing wife who would dearly like to be the Bishop herself; the Archdeacon Dr Grantly and his wife, Susan Mr Harding’s elder daughter; the Stanhope family including the entrancing cripple, Madeline, ‘a basilisk from whom an ardent lover of beauty could make no escape‘; and the Thornes of Ullathorne.

Barchester Towers provides a view of the class structure of society, in Victorian Britain. Miss Thorne and her brother, the local squire  hold a party, a gala day, inviting all the main characters and the local labourers, their wives and children. The guests are divided according to their place in society – the upper classes and the non-quality were to eat in separate marquees. The question arose as to who should go where amongst the lower class of yokels, with the Lookalofts and the Greenacres. The Lookalofts won’t sit among the bumpkins, nor will Mrs Lookaloft think Mrs Greenacres should sit next to her and talk about cream and ducklings. But neither is she a fit companion to the Thornes and Grantlys – what a dilemma for Miss Thorne! It’s scenes like these that make Barchester Towers such an entertaining novel.

This is a novel strong on character, less strong on plot, with strong female characters, power-hungry men, humour and pathos as the various battles for supremacy are played out. And throughout the book the narrator frequently expresses his opinion on the characters and on the novel itself. Here he describes Obadiah Slope:

I never could endure to shake hands with Mr Slope. A cold, clammy perspiration always exudes from him, the small drops are ever to be seen standing on his brow and his friendly grasp is unpleasant. (page 31)

The characters, however, are not portrayed as wholly good or wholly bad. Here Trollope indicates Mr Slope’s better (if you can call it that) side:

And here the author must beg it to be remembered that Mr Slope was not in all things a bad man. His motives, like those of most men were mixed, and though his conduct was generally different from that which we would wish to praise, it was actuated perhaps as often as that of the majority of the world by a desire to do his duty. (page 146)

He also comments on how he has made his characters withhold the truth from each other, causing such misunderstandings between them:

In his Autobiography Anthony Trollope wrote that he had taken great delight in writing Barchester Towers, the characters of the Bishop and Mrs Proudie were very real to him, as were the troubles of Dr Grantly, the archdeacon and the loves of Mr Slope. As they are to me too.

I thought this statement of his was very interesting:

It [Barchester Towers] achieved no great reputation, but it was one of those novels which novel readers were called upon to read. Perhaps I may be assuming more to myself than I have a right to do in saying now that Barchester Towers has become one of those novels which do not die quite at once, which live and are read for perhaps a quarter of a century; but if that be so, its life has been so far prolonged by the vitality of some of its younger brothers. Barchester Towers would hardly be so well known as it is had there been no Framley Parsonage and no Last Chronicle of Barset. (page 104)

and here we are over 150 years later still reading Barchester Towers.

The next book in the series is Doctor Thorne, which Trollope thought had a good plot and was, he believed, the most popular book he had written. I’m looking forward to reading it.