February has been an unusual reading month for me. At one point I thought I was going to  finish just three books during the whole month, but somehow I ended up with seven books on the finished pile. This brings my total for the year so far to fifteen.

Books I finished reading that I had started in January:

The Burning by Jane Casey – the first the DC Maeve Kerrigan series, with a complex  plot providing several suspects which kept me turning the pages right to the end.

by Anthony Trollope – as I read this book the characters became so real to me. I shall read more of his Barchester Chronicles. It took me most of February to read this book, alternating it with reading other books.

Books I started and finished in February:

Wreckage by Emily Bleeker. This is one of the books I slotted in while reading Barchester Towers. Actually once I started it I had no choice – I didn’t want to put it down and read it in just a few sessions. I downloaded it from Amazon UK as an Early Release book to be published on 1 March and was delighted that I enjoyed it so much. It’s well written, full of suspense, tension and drama as well as love, loss and longing.

The Murder Room by P D James. This is another book that isn’t a quick read – 432 pages, full of detail.  initially I was impatient with this slow start but soon settled into P D James’ approach and appreciated the depth of the intricate plot.

Brooklyn by Colm Toibin I haven’t written a post on this book. It’s a much shorter book and easy reading, well written spotlighting life in the 1950s in Ireland and America as seen

through Eilis’s eyes, a young woman who emigrated to America. A memorable account of both sea sickness and home sickness. The character of Eilis is so well done that she really irritated me with her passiveness and compliance with other people. I enjoyed this book and plan to read Nora Webster, which I think is Toibin’s latest book. It’s set in the same Irish location and I’m hoping it will reveal what happened to Eilis.

Spilling the Beans by Clarissa Dickson Wright. Despite her difficult childhood and alcoholism this is an upbeat autobiography, ending on a positive note: “Believe me on one thing: I have a splendidly enjoyable life”. I shall write more about this most enjoyable book.

My favourite book in February is: 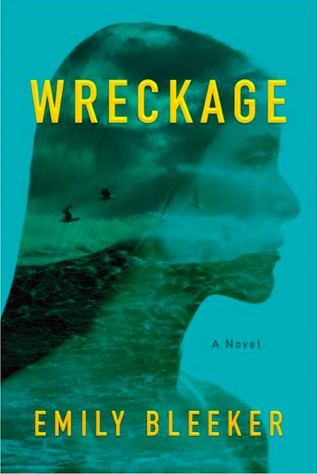 Wreckage by Emily Bleeker because I found it really compelling and a fascinating study of survival plus those secrets just had me guessing all the way through. I’m definitely on the look out for the next book by Emily Bleeker.

Next a couple of books that did not live up to my expectations:

Books I Started but Did Not Finish:

I don’t remember writing about books I started but didn’t finish before as although I often dip into books and decide not to read them, it’s very rare for me to give up on books once I’ve decided to read them.  But it has happened twice in February! And because I’ve read a fair chunk of both them I thought I’d post my thoughts about them. They were both library books.

The first one is The Silkworm by J K Rowling, writing as Robert

Galbraith, her second book featuring Cormoran Strike. I read the first, The Cuckoo’s Calling, which I liked. However, I wasn’t really enjoying this right from the start. I could cope with the swearing – it wasn’t that.  I thought it was overly detailed, but I read on until I got to the graphic murder scene with the mutilated corpse – and that was just too much for me. I didn’t want that image in my head! I skipped to the end just to find out who did it, but wasn’t tempted to go back and fill in any more details.

For more enthusiastic views see these posts from Litlove and from Thinking in Fragments, both bloggers with whom I usually agree. I appreciate that Galbraith/Rowling is having a go at the publishing world, just as in The Cuckoo’s Calling the celebrity and paparazzi world came in for a drubbing, but I found it just too grotesque and violent for my liking.

And the second book is The Silent Lady by Catherine Cookson, which

was one of the Kindle Daily Deal books a while ago. I thought it sounded interesting and borrowed it from my local library. I should have known better because I never liked the TV adaptations of her books and have never been tempted to read her novels. But as I liked her book, Let Me  Make Myself Plain,  which I read years ago, I thought maybe I would like The Silent Lady. I didn’t. It began well as a vagrant asked to see a solicitor (named Alexander Armstrong). She had disappeared over 25 years ago and the novel gradually reveals what had happened to her. Sadly, it got more and more repetitive and maudlin and I lost interest and skipped to the end but found it was just the same mawkish sentimentality.