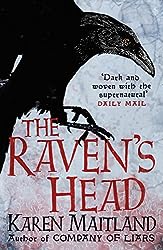 I loved Karen Maitland’s medieval mysteries, Company of Liars: a novel of the plague and The Owl Killers and although I didn’t think The Vanishing Witch had quite the same magic spark I still enjoyed it. So when Lovereading offered me a proof copy of The Raven’s Head for review I was keen to read it.

Vincent is an apprentice librarian who stumbles upon a secret powerful enough to destroy his master. With the foolish arrogance of youth, he attempts blackmail but the attempt fails and Vincent finds himself on the run and in possession of an intricately carved silver raven’s head.

Any attempt to sell the head fails ‘¦ until Vincent tries to palm it off on the intimidating Lord Sylvain ‘“ unbeknown to Vincent, a powerful Alchemist with an all-consuming quest. Once more Vincent’s life is in danger because Sylvain and his neighbours, the menacing White Canons, consider him a predestined sacrifice in their shocking experiment.

Chilling and with compelling hints of the supernatural.

Set in 1224 in France and England this is a dark book. I found parts of it very uncomfortable and disturbing to read and yet also very compelling. Life in the medieval world was cruel and brutal and The Raven’s Head describes that world in minute detail, evoking the superstitious fear of the period.

The story is told from the three main characters point of view -Vincent, Wilky, a young boy taken from his family to live in a monastery in Norfolk where unspeakable terrors await him and the other young boys, and Gisa also living in Norfolk, working in her uncle’s apothecary’s shop. Their lives are connected through Lord Sylvain who is trying to find a way to bring the dead back to life and the abbot, trying to find the elixir of life – both experimenting with alchemy.

Karen Maitland provides a cast of characters and sets out the historical background and provides notes and a glossary on the practice of  alchemy during the Middle Ages, all of which I found indispensable. Each chapter is headed by a quotation taken from the writings of early Christian and Islamic alchemists – most of which I found incomprehensible.

She explains that alchemy was a dangerous practice, many chemical experiments could go horribly wrong – as in this book. Alchemists worked in secret. It was mystical, as they searched for the means to transform the base soul of man into pure incorruptible spirit, as well as physical, searching for the stone, elixir or tincture to turn base metals into precious metals.

Although long this is a fast-paced book and I read it quite quickly.  I enjoyed the historical setting and even though it took me right to the edge of my comfort zone as far as reading horrific detail the rest of the book made up for that in terms of a well constructed storyline and believable characters. Once I began I had to finish the book.

5 thoughts on “The Ravens Head by Karen Maitland”