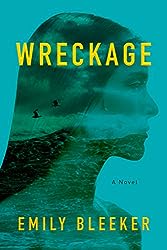 When I downloaded Wreckage by Emily Bleeker I made the fatal mistake of just seeing how it began and before I knew it I was hooked, and had abandoned (just for the time being) the two novels I was already happily reading. I didn’t want to put it down – I really enjoyed it.

It’s the story of Lillian Linden and Dave Hall, who were being interviewed following their rescue from a deserted island in the South Pacific where they had spent two years after their plane crashed into the sea. The thing is their interviews are full of lies – they are desperate to keep what really happened a secret from their families.

Genevieve Randall, the TV interviewer is convinced that they are lying and tries to get them to tell the real story – how they had survived and what had happened to the other people who were on the plane, Kent, the pilot, Theresa, the flight attendant and Margaret, Lillian’s mother-in-law.

The narrative is told from Lillian’s and Dave’s point of view and moves between the present and the past. The two time periods are clearly set out and each character has a distinct voice. It worked very well, the fact that I guessed one of the big secrets early on only increased my curiosity and anticipation of what was to come next, and I was taken by surprise by the twist at the end.

It would spoil the story to say any more about this book, except to say it’s well written, full of suspense, tension and drama as well as love, loss and longing.

Wreckage is Emily Bleeker’s first novel. She is working on her second book, Beyond and I will most certainly be looking out for it. For more information see her website.

5 thoughts on “Wreckage by Emily Bleeker”