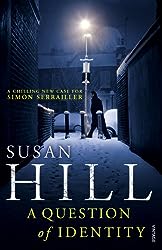 I began reading A Question of Identity, the 7th Simon Serrailler book by Susan Hill immediately after I’d finished reading the 6th book, The Betrayal of Trust (see my previous post), which had left some issues unresolved. I was hoping to find out more in this book and I wasn’t disappointed – which is one reason for reading these books in order. Another reason is to follow the continuing story of Simon and his family. And a third reason is that Susan Hill always focusses on one or more psychological/moral/ ethical issues.

How do you catch a killer who doesn’t exist?

One snowy night in the cathedral city of Lafferton, an old woman is dragged from her bed and strangled with a length of flex.

DCS Simon Serrailler and his team search desperately for clues to her murderer. All they know is that the killer will strike again, and will once more leave the same tell-tale signature.

Then they track down a name: Alan Keyes. But Alan Keyes has no birth certificate, no address, no job, no family, no passport, no dental records. Nothing.

Their killer does not exist.

I much preferred this book to the previous one. It is more balanced between the crime and the continuing story of the main characters. I suspect it may be incorrect in describing police procedures – I don’t know and really it doesn’t bother me, this is fiction after all and I have no difficulty in believing in the world of Serrailler and Lafferton that Susan Hill has created.

The main theme in this book, as the title indicates is ‘identity’ and its importance, how it is concealed, whether a personality can be changed convincingly and completely, or whether eventually the faÃ§ade will crack and the real character reassert itself.

Susan Hill is also very good at creating tension and suspense. You know there are going to be murders (just as in Casualty you know there’s going to be a terrible accident etc), but that just increases the suspense. She builds up the setting and the characters and I was hoping against hope that one of the characters would not be a victim – and of course she was. I suspected the identity of the killer quite early on and hoped I was wrong about that too – but I wasn’t.  I began to feel very uncomfortable about the fate of the elderly, living on their own, frail and vulnerable …

It’s the psychological/social elements of A Question of Identity that appealed to me more than the crime, although these elements are inevitably so closely connected.

6 thoughts on “A Question of Identity by Susan Hill”