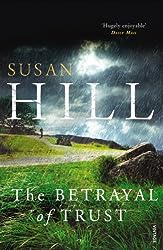 So far this year I’ve been reading from my own bookshelves – books I’ve owned before 1 January. I’ve had The Betrayal of Trust by Susan Hill, the 6th in the Simon Serrailler series, for nearly a year now. Like the earlier books, this one is  character-driven, concentrating on the people involved in the crime and Simon’s family, and also covering several ethical/moral/medical issues.

The crime element concerns a cold case, that of a teenager missing for 16 years. After flooding causes a landslip on the Moor her body comes to the surface together with that of an unknown female found in a shallow grave near by.The cold case is not a priority as the police force is struggling with staff shortages and cuts – Simon has to solve the cases mainly on his own, with the occasional help from DS Ben Vanek.

But the police investigations are not the main subject of this book. It focuses on the problems of ageing, hospice care, Motor Neurone Disease, assisted suicide, Parkinson’s Disease and Alzheimer’s Disease. A lot to cope with all at once and at times I found The Betrayal of Trust a deeply depressing book.

Having said that, as with Susan Hill’s other books, this is fluently written, looking at all sides of the issues, highlighting the dilemma facing those with terminal and debilitating illnesses, and those looking after dementia patients. The Serrailler family life has moved on from the last book, but Simon’s strained relationship with his father continues. He fails in love with a stunningly beautiful woman, which causes yet more complications – he just  doesn’t seem capable of having a happy relationship!

Although this is a quick read it’s also rather dark, with some dodgy and sinister characters and I was expecting it to be better than it is. It is a complex novel but the solution to the crime mystery soon becomes evident and is rather rushed at the end. There are several issues left unresolved and I hope they will be clarified in the next book in the series, A Question of Identity, which is next up for me to read.

15 thoughts on “The Betrayal of Trust by Susan Hill”