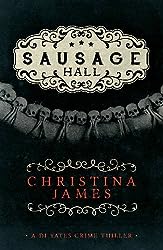 When the publishers of Sausage Hall emailed me offering a review copy of the book I thought it sounded interesting, although I wasn’t keen on the title – I thought it sounded a bit gimmicky and it nearly putting me off reading it.  But I’m glad it didn’t because I would have missed out on a good story, a crime mystery with a sinister undercurrent exploring the murky world of illegal immigrants, and a well researched historical element. I enjoyed it.

Sausage Hall is the third book in the DI Yates series and although I haven’t read the first two that wasn’t a problem – it stands well on its own, but I’d like to read the two earlier books. This is set in the South Lincolnshire Fens and is an intricately plotted crime mystery, uncovering a crime from the past whilst investigating a modern day murder.

Sausage Hall: home to millionaire Kevan de Vries, grandson of a Dutch immigrant farmer. De Vries has built up a huge farming and food packing empire which extends, via the banana trade, to the West Indies. But Sleazy MD, Tony Sentance, persuades de Vries to branch out into the luxury holiday trade. De Vries and wife, Joanna, take the first cruise out to explore the potentially lucrative possibilities. However, back at home, a break-in at Sausage Hall uncovers a truly gruesome historical discovery. And when a young employee of de Vries is found dead in the woods, D.I. Yates is immediately called in …

The narrative switches between the first person present tense (Kevan) and the third person past tense, which took me a bit to get used to. Actually I thought this worked very well; even though the use of the first person present tense usually irritates me, it didn’t in this book and it gives a good insight into Kevan’s character as well as providing essential information about his background and relationships.

I particularly liked DC Juliet Armstrong, DI Tim Yates’ colleague – the two make a good combination, even though Juliet spends a good part of the book isolated in hospital with Weil’s disease, having been bitten by a rat. In fact of the two characters I thought Juliet was the most clearly defined. Maybe a second reading would help clarify Yates’ character for me, or maybe this is where not reading the two earlier books is a drawback. This is not a book you can read quickly as there are plenty of characters and several plot threads that need to be kept in my mind as you read the book.

I liked the historical elements of the plot and the way Christina James has connected the modern and historical crimes, interwoven with the history of Kevan’s home, Laurieston House, known to the locals as ‘Sausage Hall’ and the secrets of its cellar – just what is the link between Cecil Rhodes, the Victorian financier, statesman, and empire builder of British South Africa, and the Jacobs family who were the previous owners of Sausage Hall?

Added to this is the mystery of the death of a young woman found dead in the woods near the De Vries food-packing plant in Norfolk. It seems she was employed at the plant although the supervisors there deny any knowledge of her. DI York suspects she is an Eastern European illegal immigrant. And as for Tony Sentance, just what is his hold over Kevan and his wife and their son, Archie? It was only just before the end that I suspected the truth.

Publishers’ Biographical Note: ‘C.A. James was born in Spalding and sets her novels in the evocative Fenland countryside of South Lincolnshire. She works as a bookseller, researcher and teacher. She has a lifelong fascination with crime fiction and its history. She is also a well-established non-fiction writer, under a separate name.’

There is more information about Christina James and her books on her blog The earlier DI Yates books are In the Family and Almost Love.