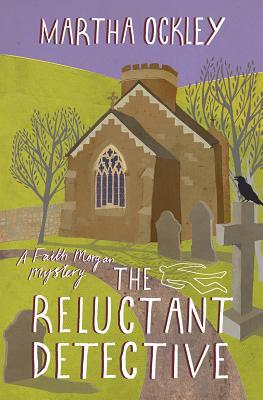 I had little idea what to expect from Martha Ockley’s first Faith Morgan mystery, The Reluctant Detective as I hadn’t come across the author before and all I had to go on was the description on LibraryThing’s Early Reviewers page last month:

‘Former cop Faith Morgan may have quit the world of crime, but crime has not let her go. Now a priest in the Church of England, she is assigned to the improbably named village of Little Worthy, and within an hour of her arrival she witnesses the sudden, shocking death of a fellow priest. To her distress, the detective assigned to the case is Ben, her former partner and former boyfriend.As she meets her parishioners she learns some surprising details about her apparently well-loved predecessor, and starts to suspect a motive for his death. The cop may have donned a clerical collar, but the questions keep coming. How will she reconcile her present calling with her past instincts? Is she in danger herself? What should she do about Ben?’

I thought a detective who  was a priest and who used to be a policewoman sounded interesting. So, I am very pleased that The Reluctant Detective turned out to be a good read. Faith Morgan is a well-rounded character; she’s very likeable, observant, compassionate and the sort of person that people feel comfortable talking to – a bit like a young Miss Marple. Indeed, the book has an Agatha Christie feel to it – set in an apparently idyllic country village, with interesting and somewhat quirky characters and although there is one rather gruesome death, it’s not a gory thriller. In short it’s the type of murder mystery that I like, with plenty of complications that kept me guessing about the identity of the murderer for most of the book.

The church and village location are convincing. The parish church of St John is an old building dating from Saxon times, with a tower and church bells, set in the English countryside:

Faith avoided the main approach and followed a gravel path around the back of the church. A creamy cloud of ivory clematis cascaded over a grey stone wall. Beyond a solitary pony raised its chestnut head to gaze mournfully at her from a field of weeds. Some way off squatted a group of ramshackle farm buildings. (page 9)

Faith’s ex – Detective Inspector Ben Shorter, reluctantly allows Faith to contribute to the search for the murderer and the chemistry between the two of them is clearly evident even though he can’t understand why she left the police force for the church. Indeed, Faith herself wonders if she has done the right thing, cutting herself off from her old life and her old self as she realises that she likes investigating, and analyzing people, their expressions and body language and working out what makes them tick. But these are assets for a priest as well as for a police officer. And as for death:

It struck Faith how death is always startling, facing us with the greatest mystery: how the particular and the individual can vanish from this world so completely in a moment. (page 17)

The back cover reveals that Martha Ockley lives in the North East of England and has close links with the church, having grown up as the daughter of a minister. She is a full-time writer of both fiction and non-fiction. I was curious about Martha Ockley and wondered why she had given ‘special thanks to Rebecca Jenkins’ on the title page, so I searched online and discovered that ‘Martha Ockley’ is actually a pseudonym of Rebecca Jenkins, the daughter of the Rev David Jenkins, formerly the Bishop of Durham.

Thanks to LibraryThing and Lion Fiction/Kregel Publications for providing a copy for review. Based on my reading of The Reluctant Detective I shall certainly seek out more books by Martha Ockley/Rebecca Jenkins. There are two more Faith Morgan books:

And writing as Rebecca Jenkins:

7 thoughts on “The Reluctant Detective by Martha Ockley”