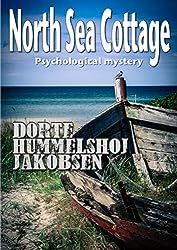 Dorte Hummelshoj Jakobsen’s latest book, North Sea Cottage, is an e-book, a novella set in Denmark. It’s another dual time period book – it seems that each book I’ve read recently is one of these. This one is split between the present day and 1943/4 and it works very well.

I thoroughly enjoyed this book; the cottage in the title is owned by Tora’s aunt, Bergatora. As soon as I began reading I was immediately transported in place away to the other side of the North Sea to Denmark with Tora, and in time back to the Second World War, with her aunt, Bergatora. In just a few words Dorte Hummelshoj Jakobsen draws a vivid picture of the old fisherman’s cottage surrounded by dense sea fog.

Tora is struggling to overcome her own problems when she is faced with a new problem. The old stable next to the cottage catches fire during a thunder storm and in the aftermath of the fire Tora finds a skeleton in the potato cellar under the ruined stable. Who is it who had died in the cellar? Bergatora is reluctant to talk about the war years and her brother, Tora’s father, was too young at the time to help. It was a time when Denmark was under German occupation and a resistance movement was under way. Inspector Thomas Bilgren suspects the victim may have been related to the German occupation.

Tora, helped by Bilgren attempts to discover the truth, but is hampered by the strong character of her aunt and the silence surrounding what happened during the war. I loved this aspect of the book – the delving back into history, the way the narrative switches backwards and forwards, gradually revealing what had happened. North Sea Cottage is only about 90 pages but it has depth both in mystery and in characterisation and the setting is so atmospheric. I was fearful for Tora’s safety as she dug deeper into the mysteries from the past.

Thanks to Dorte Hummelshoj Jakobsen, who kindly sent me a copy of her book. She has a blog – Djskrimiblog and used to be a teacher. She writes both serious mysteries as well as humorous and cosy stories about the Gershwin family in Knavesborough, a fictional village in Yorkshire, publishing in Danish and English. I like her humorous stories but prefer the serious ones like North Sea Cottage and her previous novel, Anna MÃ¤rklin’s Family Chronicles. She is currently at work on her next novel – Crystal Nights, to be published in 2014/5.