I finished reading The House of Stairs, the  third psychological thriller by Barbara Vine yesterday. It is a most remarkable book, in that it turns a murder mystery upside down, as it were. It is clear from the start that there has been a murder and the murderer is known – she has just been released from prison. But who did she murder? Why, where, when and how? The other characters all know – but not the reader.

The crime is only revealed very gradually, building up the suspense and tension in a series of flashbacks, as you realise the how, the where and the when, but only by inference – guesswork on my part really. The why too, can be worked out, but as for the who – I kept changing my mind, only finally deciding it must be this person, just a few pages before the denouement.  Ruth Rendell writing as Barbara  Vine certainly sets a puzzle, a tangled web of characters, situations, and psychological profiles. And, of course, there is a certain ambiguity right at the end. It’s not a book you can read quickly, but it certainly kept me turning the pages wanting to know what had happened.

The first person narrator is Elizabeth, who is told a terrible secret about her mother and lives her life as a consequence in fear of inheriting the family disease. At the beginning of the book she sees her old friend Bell, and follows her at a short distance, not sure it really is her. It gives her a sense of unease and a quiver of panic bringing back memories of earlier events that had resulted in Bell’s imprisonment for murder fourteen years ago.

She and Bell and a number of other characters (who come and go) lived with Cosette in the House of Stairs, so called because it’s a big house on five floors with a staircase of 106 stairs.  Cosette had been married to Elizabeth’s mother’s cousin and they came to view each other as mother and daughter. Cosette is a caring character, very tolerant and easy-going, one who welcomes other people into her home, who listens to them and leaves them feeling revitalized. Bell, however, is cold and uncaring. The menace is felt as Bell climbs the stairs to her room on the top floor, the 104th step creaking as she does so and enters the room, the room with the dangerous window that came down to no more than six inches or so from the floor (page 121).

There is so much I could write about this book. For one thing there are various allusions to Henry James’s work, which Elizabeth is studying hoping to write a thesis about James – to say any more would be to reveal too much.  Another allusion is to Tennyson’s poem Mariana and one that interested me greatly to a painting by Bronzino of Lucrezia Panciatichi, dressed in a beautiful red gown. It reminds Elizabeth of Bell, and when she wears a similar red dress found in Cosette’s belongings the resemblance is striking. I found a reproduction of the painting on Wikipedia: 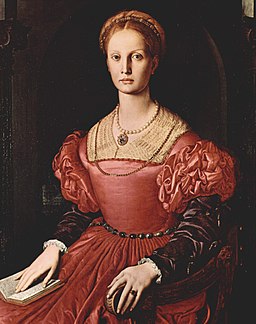 Elizabeth has a thought, which struck me as particularly chilling. She looks at people

… wondering which of them, if any, are like her. I mean like her in that they have killed someone and been sent to prison for it, served their sentence and come out again. It is a new phenomenon. Murderers used to be hanged.

Now they are set free and come back to live among us. Or to exist. I look at people and I wonder. … ordinary people looking like everyone else, having ordinary jobs, perhaps living next door. (page 212)

The House of Stairs:

6 thoughts on “The House of Stairs by Barbara Vine: a Book Review”