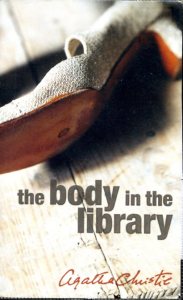 I wrote some initial thoughts about The Body in the Library in my Sunday Salon post.  This is the mystery of who killed Ruby Keene. Ruby was eighteen, a professional dancer employed at the Majestic Hotel Danemouth as a dance hostess. Her body was found  in the Bantrys’ library at Gossington Hall. Then the charred body of another girl is found in an abandoned quarry. Who killed these girls and why?

The police are investigating the murder, including Inspector Slack, who is anything but slack, an energetic man, with a bustling manner. The police investigation is reinforced by the retired head of Scotland Yard, Sir Henry Clithering, whilst quietly in the background Miss Marple, at the request of Mrs Bantry, is also looking for the murderer.  I had little idea who it was even though I read the book very carefully. I had my suspicions and was completely wrong.

There are various suspects – Colonel Bantry, because the body was found in his library, Basil Blake who is connected with the film industry, has loud, drunken parties, George Bartlett, a rather dim-witted chap who is a guest at the Majestic, apparently the last person to see Ruby alive, and the Jefferson family – Conway Jefferson confined to a wheelchair, who was proposing adopting Ruby as his daughter, Mark, his son-in-law and Adelaide his daughter-in-law. Ruby was hired by the hotel as a dance hostess to partner Raymond Starr (also the tennis coach) after Josie Turner had sprained her ankle.

This is a satisfying murder mystery in that all the clues are there and when Miss Marple reveals who the killer is it is so clear that I don’t know why I hadn’t realised pages earlier, but that is Agatha Christie’s skill. A quick and enjoyable read.

5 thoughts on “The Body in the Library by Agatha Christie: Book Review”