I’m so behind with writing about the books I’ve read. I now have eight to do – five from the end of last year and three that I’ve read this month. 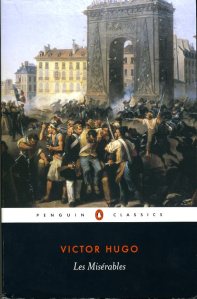 I’ve already written a snippet (see this post) about Les Misérables, so I’ll begin with this book. My first encounter with the story was many years ago watching a serialisation on TV and what stood out in my mind from that was the horror of Fantine, desperate for money selling her two front teeth and then towards the end of the book seeing Valjean trudging through the French sewers surrounded by excrement and rats. Reading it last year I realised there is so much more, with a huge cast of characters and covering a sweep of French history in the early 19th century; there’s the Battle of Waterloo and the July Revolution of 1830 which Hugo describes in great detail; there are many digressions and meditations, but basically it’s the story of Jean Valjean the ex-prisoner who is transformed by the actions of Monseigneur Bienvenue, the Bishop of Digne and is pursued by the indefatigable Inspector Javert.

Parts of the book are quite easy reading and I read them quickly. These were parts about the main characters, Valjean, Fantine, her daughter Cosette who Valjean is dedicated to protect, Marius who falls in love with Cosette, the evil Thénardiers and Éponine and Gavroche, their daughter and son. But other parts had me yawning and dragged, when there was too much detail about battles and sieges. Les Misérables cannot compete with Tolstoy’s War and Peace, which I think is just so beautifully descriptive that I forget that I don’t like reading about battles and war. Having said that, it is a remarkable book about the forces of good and evil and I enjoyed reading it.