What a gloomy day outside. I knew it was wet when my cat rubbed round my legs first thing this morning. Looking out of the window I could seen a fine sprinkling of snow. That’s all gone now and the rain has set in. What better thing to do than read Les Misérables for a while and then tackle the problem of where to store more books than will fit onto our bookshelves. 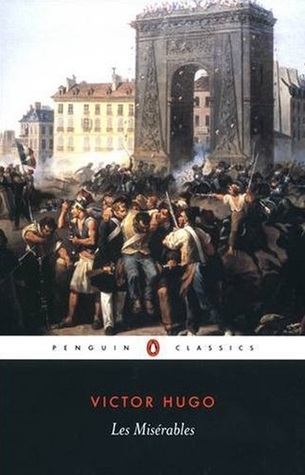 I’ve made good progress this week with reading Hugo’s masterpiece. I’d put it on one side just after meeting Marius, the young aristocrat estranged from his grandfather. This week matters have progressed quite rapidly. Marius walking in the Luxembourg garden sees an elderly gentleman and a beautiful young girl. He falls in love with the girl (who is of course, Cosette). The following pages bring the sordid and wretched conditions of the poor so vividly to life as I read about the true “misérables” of this novel:

Certainly they appeared utterly depraved, corrupt, vile and odious; but it is rare for those who have sunk so low not to be degraded in the process, and there comes a point, moreover, where the unfortunate and the infamous are grouped together, merged in a single, fearful word. They are les misêrables – the outcasts, the underdogs.

I read with bated breath the account of Marius watching through a peephole the terrible happenings in the room next to his as ‘Monsieur Leblanc’ (Valjean) is ambushed, and I wondered how he was going to escape  from both the gangsters and Inspector Javert. I have now finished Part Three, which ends with the introduction of a street urchin, another significant character I assume.

So for the rest of the day it’s more sorting and tidying. D has found a space for another bookcase and in his wonderfully resourceful way remembered he had the parts to make one. He has put them together and now it just needs fixing to the wall and then I can fill it up.

4 thoughts on “The Sunday Salon”