I have been neglecting my TBRs this year and have been reading mainly new books and library books.So here is the third instalment of my A – Z of TBRs, a series of posts in which I take a fresh look at some of my TBRs to inspire me to read more of them by the end of the year. These TBRs are all physical books – I’ve not included e-books. 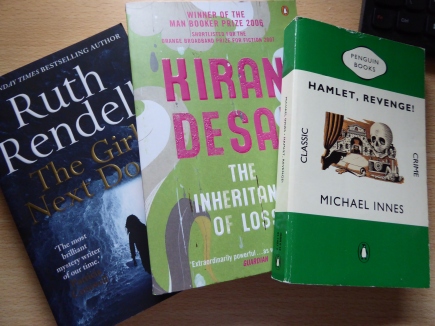 G is for The Girl Next Door by Ruth Rendell, a book I’ve had for just over a year. When a new house is being built a long buried secret is uncovered – a tin box is found in an earthen tunnel. It contained two skeletal hands, one male and one female.

Their garden was not beautiful. It had no flowering trees, no roses, no perfumed herbs. Tunnels, they called it at first. The word ‘qanat’, an impossible word, was found by Daphne Jones and adopted by the rest of them. It meant, apparently, a subterranean passage for carrying water in some oriental language. They liked it because it started with a q without a u. Their scholteachers had taught them that no word could ever start with a q unless it was followed by u, so Daphne’s idea appealed to them and the tunnels became qanats. In time to come the qanats became their secret garden. (pages 14 -15)

H – Hamlet, Revenge! by Michael Innes (on my TBR shelves since May 2015). This is a green Vintage Penguin, first published in 1937, and in this edition in 1961, about a murder planned to take place in the middle of a private performance of Hamlet.

It had begun as a family frolic. And now, although it would not be publicly reported, the dramatic critics were coming down as if to an important festival. Professors were coming to shake learned respectable bald heads over a fellow-scholar’s conception of an Elizabethan stage. Aged royalty  was coming to be politely bewildered. Most alarming of all, ‘everybody’ was coming – for the purpose no doubt, of being where ‘everybody’ was. And even if it was a select and serious everybody – a known set before whom a Lord Chancellor might mime without misgiving – it was still a crowd, and its actions were unpredictable. (page 28)

I – The Inheritance of Loss by Kiran Desai, a book I’ve had for just over 10 years! It won the Man Booker Prize in 2006. This is set in India, in a dilapidated mansion high in the Himalayas, the home of three people each dreaming of another time – a retired judge, Sai, his granddaughter and a cook.

In Kalimpong, high in the northeastern Himalayas where they lived – the retired judge and his cook, Sai and Mutt – there was a report of new dissatisfaction in the hills, gathering insurgency, men and guns. It was the Indian Nepalese this time, fed up with being treated like the minority in a place where they were the majority. They wanted their own country, or at least their own state, in which to manage their own affairs. Here, where India blurred into Bhutan and Sikkim, and the army did pull-ups and push-ups, maintaining the tanks with khaki paint in case the Chinese grew hungry for more territory than Tibet, it had always been a messy map. The papers sounded resigned. A great amount of warring, betraying, bartering had occurred; between Nepal, England, Tibet, India, Sikkim, Bhutan; Darjeeling stolen from here, Kalimpong plucked from there – despite, ah, despite the mist charging down like a dragon, dissolving, undoing, making ridiculous the drawing of border. (page 9)

What do you think? Do you fancy any of them?

One reason I haven’t read these books yet is that they’re all in such a small font!