What to read next is nearly always a difficult question, the problem being that I have so many books I’ve bought/borrowed that I really want to read right now and much as I would like to I can’t read them all at once.

So, this morning here I am nearly ready to start a new book and wondering which one to go for. It could be The Chosen Dead by M R Hall, his fifth novel in the Coroner Jenny Cooper series. 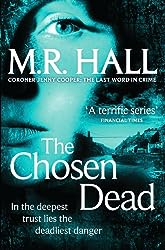 The last thing Roy Emmett Hudson was expecting on the eve of his forty-first birthday was a bullet in the head, but life and death are only a single breath apart, and as a biologist, he appreciated that more than most. Even as he strolled across the company lot to the Mercedes CoupÃ© he had driven all winter without once raising the roof, his killers’ thoughts were already moving on to where they might dump his body so that it might never be found.

I’ve read three of the earlier books in the series, and liked them, so I’m hoping this one will be good. It’s an intriguing beginning because it doesn’t seem likely that Coroner Jenny Cooper could be involved in investigating this death as she is a Bristol coroner …

When Bristol Coroner Jenny Cooper investigates the fatal plunge of a man from a motorway bridge, she little suspects that it has any connection with the sudden death of a friend’s thirteen year old daughter from a deadly strain of meningitis. But as Jenny pieces together the dead man’s last days, she’s drawn into a mystery whose dark ripples stretch across continents and back through decades. In an investigation which will take her into the sinister realms of unbridled human ambition and corrupt scientific endeavour, Jenny is soon forced to risk the love and lives of those closest to her, as a deadly race to uncover the truth begins . . .