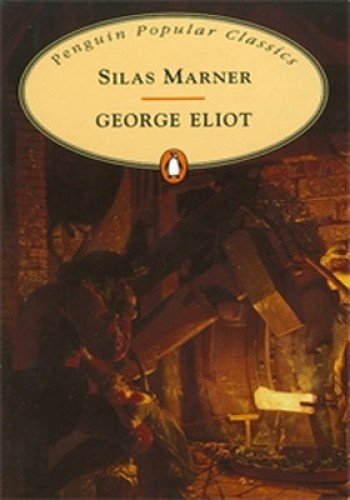 The back cover of my Penguin Popular Classics edition of Silas Marner tells me it was George Eliot’s own favourite novel. The story revolves around Silas Marner, a weaver living in Raveloe, a village on the brink of industrialisation. He was wrongly accused of theft and left his home town to live a lonely and embittered life in Raveloe where he became a miser, hoarding his gold and counting it each night. Until one night his life is changed by the theft of his money and a little girl who came to live with him, having been abandoned in the snow.

It took me a while to settle into George Eliot’s style of writing, with her long, long sentences – some so long I had forgotten how they had started, before I got to the end. But once my mind had adjusted to the rhythm of her writing I enjoyed this short book (221 pages in my copy). It’s set in the early years of the 19th century (she was writing the book in 1861) and begins with a description of linen weavers and the superstition that surrounded them. They were:

… pallid undersized men, who by the side of brawny country-folk, looked like the remnants of a disinherited race. The shepherd’s dog barked fiercely when one of these alien-looking men appeared on the upland, dark against the early winter sunset; for what dog likes a figure bent under a heavy bag? – and these pale men rarely stirred abroad without that mysterious burden.

In that far-off time superstition clung easily round every person or thing that was at all unwonted … no one knew where wandering men had their homes, or their origin … to peasants of old times, the world outside their own direct experience was a region of vagueness and mystery … (page 9)

There are two strands to the storyline – one about Silas and the other about Godfrey Cass, two very different men, one poor, a social outcast and the other rich, the son of the local squire. They move in very different social circles, the Cass family life is one of lazy indulgence, but their lives intersect through the arrival of the little girl.

I really enjoyed this short book, bringing to life a world that had disappeared by the time George Eliot was writing it. It has the touch of a fairytale about it, or of a folk myth, and it tells of the consequences of our actions. The characters come to life through Eliot’s descriptions and I could easily picture their appearance and hear their speech. For example

She actually said “mate” for “meat”, “appen” for “perhaps”, and “oss” for “horse”, which, to young ladies living in good Lytherly society, who habitually said ‘orse, even in domestic privacy, and only said ‘appen’ on the right occasions, was necessarily shocking. (page 113)

I wondered whether this would be a sentimental tale, but although it is touching it isn’t sentimental. In the end it’s about a world of uncertainties, of ways of looking at life, of the nature of belief and religion and of the possibilities of change. And it does have a happy ending.

As well as being my Classics Club Spin book it’s also one of my TBRs, qualifying for the Mount TBR Reading challenge.

The result of the Classics Club Spin is No. 1 which for me is Silas Marner by George Eliot. I am so pleased – I wanted a short book and lo and behold this is a short book!

Although the shortest of George Eliot’s novels, Silas Marner is one of her most admired and loved works. It tells the sad story of the unjustly exiled Silas Marner – a handloom linen weaver of Raveloe in the agricultural heartland of England – and how he is restored to life by the unlikely means of the orphan child Eppie.

Silas Marner is a tender and moving tale of sin and repentance set in a vanished rural world and holds the reader’s attention until the last page as Eppie’s bonds of affection for Silas are put to the test.

First published in 1861 as Silas Marner: the Weaver of Raveloe, George Eliot described it as ‘a story of old-fashioned English life’.

It’s time I began reading another classic for the Classics Challenge. I thought I’d look at the openings of some to see which takes my fancy.

Wives and Daughters by Elizabeth Gaskell:

To begin with the old rigmarole of childhood. In a country there was a shire, and in that shire there was a town, and in that town there was a house, and in that house there was a room, and in that room there was a bed, and in that bed there lay a little girl; wide awake and longing to get up, but not daring to do so for fear of the unseen power in the next room – a certain Betty, whose slumbers must not be disturbed until six o’clock struck, when she awakened herself ‘as sure as clockwork’, and left the household very little peace afterwards.

It reminds me of the children’s song Old MacDonald had a Farm with its repetitions. The little girl is Molly Gibson and Betty with the unseen powers is the family’s servant. It promises a story of a family and Molly’s place within it and this opening interests me. I don’t know anything about the book and have not seen any of the TV adaptations, so I’m coming to it with a completely open mind – no other interpretations to influence my reading of Elizabeth Gaskell’s words.

In the days when the spinning-wheels hummed busily in the farmhouses – and even great ladies, clothed in silk and thread-lace, had their toy spinning-wheels of polished oak – there might be seen, in districts far away from the lanes, or deep in the bosom of the hills, certain pallid undersized men, who, by the side of brawny country-folk, looked like the remnants of a disinherited race.

This one looks good too about village/rural life at the beginning of the 19th century. The only book by George Eliot that I’ve read is Middlemarch, which I loved. You have to have time and patience to read her books. Silas Marner, however, is a much shorter book with less characters than Middlemarch.

Three Men in a Boat by Jerome K Jerome:

There were four of us – George and William Samuel Harris, and myself, and Montmorency. We were sitting in my room, smoking, and talking about how bad we were – bad from a medical point of view I mean, of course.

We were all feeling seedy, and we were getting quite nervous about it.

Yet another author I know nothing about and as for the book I only know it’s reckoned to be a comedy. Again I have very few preconceptions about this book and have no ideas about the characters or what happens. I think Montmorency may be a dog as the book’s full title is Three Men in a Boat (to say nothing of the dog).

Now I just have to decide which one to read.