This week I’m featuring Now is the Time by Melvyn Bragg. I loved his Soldiers Return quartet amongst some of his other books, so I’m hoping this historical fiction set in 1381 at the time of  the Peasants’ Revolt will be as good. Richard II was on the throne of England when a vast force of people led by Wat Tyler and John Ball demanded freedom, and equality.

The accused priest stood before the court. He was dressed in the cheapest cloth. From his scuffed and shabby habit, from his spare frame and plainness of manner in the ornately, hierarchically dressed company of the ecclesiastical court, he seemed to be just another casualty of the harsh laws of the Church. But there was about him a self-composure, which threw out the challenge of his independence too arrogantly for the taste of the court.

Also every Friday there is The Friday 56, hosted by Freda at Freda’s Voice. *Grab a book, any book. *Turn to Page 56 or 56% on your  ereader . If you have to improvise, that is okay. *Find a snippet, short and sweet, but no spoilers!

Armies in Normandy, Ireland and the north and the English garrisons abroad had not been paid for months. The uprising in Flanders had ruined the rich English wool trade. Aristocrats were accused of corruption and vanity campaigns; Plantagenet heirlooms and jewels had been pawned to city merchants. It was said that it was now the city; not the government, that controlled policy.

At the end of May 1381, the fourteen-year-old King of England had reason to be fearful: the plague had returned, the royal coffers were empty and a draconian poll tax was being widely evaded. Yet Richard, bolstered by his powerful, admired mother, felt secure in his God-given right to reign.

Within two weeks, the unthinkable happened: a vast force of common people invaded London, led by a former soldier, Walter Tyler, and the radical preacher John Ball, demanding freedom, equality and the complete uprooting of the Church and state. They believed they were rescuing the King from his corrupt ministers, and that England had to be saved. And for three intense, violent days, it looked as if they would sweep all before them.

Now is the Time depicts the events of the Peasants’ Revolt on both a grand and intimate scale, vividly portraying its central figures and telling an archetypal tale of an epic struggle between the powerful and the apparently powerless.

I vaguely remember learning about Wat Tyler and the Peasant’s Revolt at school. This book should fill in the gaps in my memory!

On Tuesday I borrowed three books from the mobile library, all by authors whose books I’ve read and enjoyed. I often can’t decide which books to borrow, but this week I picked these books off the shelves straight away and knew I wanted to read them:

The Glass-Blowers by Daphne du Maurier, one of my favourite authors. The first book of Daphne du Maurier’s that I read was my mother’s copy of Rebecca, which I first read as a young teenager and I loved it. Since then I’ve read most of her books, but there are a few that I haven’t read including this one. It’s a fictionalised reworking of her own family history. She was a descendant of a French master craftsman who settled in England during the French Revolution.

Unsheltered by Barbara Kingsolver, who has been one of my favourite authors ever since I read The Poisonwood Bible. It’s a long book of over 500 pages, so I’m hoping I’ll be able to renew it as I doubt I’ll managed to read it by 13 July. Set in Vineland, New Jersey, this is a dual timeline novel, about two families living in the same house – one in the present century and the other in the nineteenth. Just reading the first two sentences made me to know more – ‘The simplest thing would be to tear it down,’ the man said. ‘The house is a shambles.’

Love Without End: A Story of Heloise and Abelard by Melvynn Bragg. It was reading his Soldier’s Return trilogy that first made me want to read more of his books. This is another novel with a dual timeline. It’s set in Paris in 1117 about the love affair of Heloise and Peter Abelard and nine centuries later about Arthur as he writes a novel about the couple, aiming to bring Heloise out of history’s shadows. I’ve never read the medieval story of Abelard and Heloise, so this will all be new to me.

Have you read any of these books? Are you tempted?

On Tuesday it was time for another visit to my favourite bookshop Barter Books, one of the largest secondhand bookshops in Britain. This is where you can ‘swap’ books for credit that you can then use to get more books from the Barter Books shelves.

Hotel du Lac by Anita Brookner. I first read this many years ago and want to reread it – and hope I still like it as much. It won the Booker Prize in 1984. From the back cover: ‘Into the rarefied atmosphere of the Hotel du Lac timidly walks Edith Hope, romantic novelist and holder of modest dreams. Edith has been exiled from home after embarrassing herself and her friends. She has refused to sacrifice her ideals and remains stubbornly single. But among the pampered women and minor nobility Edith finds Mr Neville, and her chance to escape from a life of humiliating spinsterhood is renewed . . .’

Now is the Time by Melvyn Bragg. I loved his Soldiers Return quartet amongst some of his other books, so I’m hoping this historical fiction set in 1381 at the time of  the Peasants’ Revolt will be as good. Richard II was on the throne of England when a vast force of people led by Wat Tyler and John Ball demanded freedom, and equality.

Then, three books by Belinda Bauer that I’ve been wanting to read for some time now:

Blacklands, her first novel – this tells the story of a game of cat and mouse between a 12 year old boy, Steven, and Arnold Avery, a serial killer and an abuser of children, who murdered Steven’s Uncle Billy, when he was 11 years old, twenty years ago.

Her second book, Darkside is set in the middle of winter time, when the people who live in a peaceful place, Shipcott, are shocked by the murder of an old woman in her bed.

The Beautiful Dead is about Eve Singer, a TV crime reporter, who will go to any length to get the latest scoop. But when a twisted serial killer starts using her to gain the publicity he craves, Eve must decide how far she’s willing to go – and how close she’ll let him get.

I’d love to start all these books straight away but I think I’ll begin with Belinda Bauer’s books, especially as I also have a review copy of her latest book, Snap which is due to be published as an e-book on 3 May 2018, with the hardback and paperback editions coming out later this year. 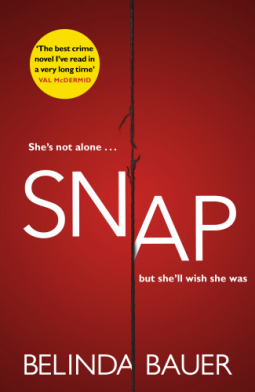 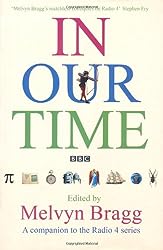 I began reading In Our Time, A Companion to the Radio 4 series back in August and I’ve been reading short sections on most days since then, finally finishing it this morning. It is long book and I didn’t want to read it quickly.

Melvyn Bragg has selected episodes on a wide variety of subjects encompassing the history of ideas – philosophy, physics, history, religion, literature and science. This book contains transcripts of 26 programmes, a selection from hundreds of programmes broadcast over eleven years. The benefit of having it in book form means that it’s easy to pause, think, or re-read to make sure I was understanding the subject as much as possible.

The programmes are listed on the back cover – Darwin was covered by four programmes:

With such a wide range of subjects it’s not so surprising that I found some more interesting than others, but I was surprised that some that didn’t appeal from the titles were actually fascinating and I now know more about black holes and antimatter than before – how much I can remember is another matter! I’m not alone in this, as Bragg said in the Afterword, his:

… only regret is that in the more testing subject areas he finds that his memory after the programme will not retain some or even much of what made the programme intriguing. (pages 573-4)

But it’s there in print, so I can refresh my memory at any time! I liked the fact that these are transcripts, not formal lectures, so that it comes across as conversations between experts with Bragg, every now and then asking the questions that someone like me, not knowing much about the subject, would want to ask. An ideal book for an eclectic reader!

It’s not easy to pick out highlights as there are so many that fascinated me. As Halloween is approaching I’m remembering the chapter on ‘Witchcraft’, but others as diverse as ‘Tea’, ‘Socrates’ and the four ‘Darwin’ programmes also stand out. And where else could you go from ‘Agincourt’ to ‘Plate Tectonics’?

In Our Time is broadcast each Thursday at 9am on BBC Radio 4. This week’s episode was ‘Rudyard Kipling’. This and all the other programmes are available as downloads.