Two more short reviews as I try to catch up on the books I’ve been reading. Both are excellent books, each one with a great sense of location and descriptive writing bringing the scenes and characters vividly to life.

First, Coffin Road by Peter May, is a standalone novel, set on the Isle of Harris in the Outer Hebrides. I read it because I loved his Lewis trilogy. There are 3 strands to the story. There’s a mystery surrounding a man, washed up during a storm on a deserted beach on the Isle of Harris. He is wearing a life jacket, is battered and bruised – and has no idea who he is or where he is. The only clue to why he is living on Harris is a folded map of a path named the Coffin Road and following the route marked on the map he finds some hidden beehives that are familiar to him. In the second strand DS George Gunn investigates the murder of a bludgeoned corpse discovered on a remote rock twenty miles to west of the Outer Hebrides. And thirdly, a teenage girl in Edinburgh is desperate to discover the truth about her scientist father’s suicide.

It is fast-paced, almost impossible to put down, and full of intrigue and mystery. Each strand of the story kept me guessing, wondering what the connections between them were. It’s tense with the sense that time is running out for all the characters and I wasn’t sure whether any of them were reliable narrators or were who they appeared to be.

In addition the bees have a major role in the story. All the facts about the bees slot seamlessly into the story and I learned quite a lot about bees that I didn’t know before, especially their role in climate change.

The Wonder is a very strange story. It’s uncomfortable reading, but I felt I just had to read it. And although it moves at a slow pace I read it quickly in large chunks. It is tense, full of atmosphere and just like Coffin Road, I found it almost impossible to put it down, such is the power of Emma Donoghue’s storytelling.

The plot is simple: it is set in a small village in the Irish Midlands in the 1850s. Eleven-year-old Anna O’Donnell stops eating, but remains miraculously alive and well. A nurse, Lib Wright, trained in the Crimea by Florence Nightingale, and a nun, Sister Michael are hired by a committee of influential locals to spend two weeks observing her to make sure she is not being fed secretly.

Lib observes Anna in scrupulous detail, noting Anna’s symptoms. At first she seems a healthy little girl but as the two weeks go by she develops worrying symptoms – downy cheeks, scaly skin, blue fingertips, and swollen lower limbs and hands. Lib begins to realise that it is not just a question of how Anna is managing to exist without food, but also why. What is motivating Anna to persist in saying she is not hungry and doesn’t need to eat? The answer seems to lie in her religious beliefs, and maybe religious hysteria is playing a part as well as the clash between medical science and faith. But is there more to it? Lib wonders about the family’s relationships and the effect of Anna’s brother’s death just a few months before Anna stopped eating.

As Donoghue explains in her author’s note The Wonder is an invented story, inspired by almost fifty cases of so-called Fasting Girls in the British Isles, Western Europe and North America between the 16th and 20th centuries. A film of the book is available on Netflix, but I don’t think I could bear to watch it.

This week I’m featuring a book that I’m thinking of reading soon – Coffin Road by Peter May. 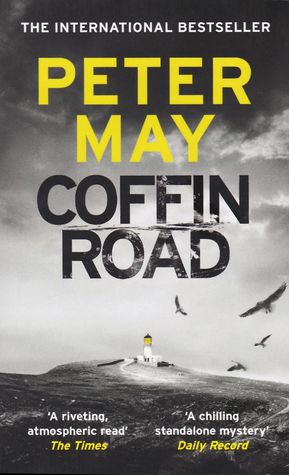 The first thing I am aware of is the taste of salt. It fills my mouth. Pervasive. It dominates my being, smothering all other senses. Until the cold takes me. Sweeps me up and cradles me in its arms. Holding me so tightly I can’t seem to move. Except for the shivering. A raging, uncontrollable shivering. And somewhere in my mind I know this to be a good thing. My body is trying to generate heat. If I wasn’t shivering I would be dead.

I have written so many times that the use of the present tense is not my preferred tense – so why am I even thinking of reading this book? Well, it’s by Peter May and I’ve enjoyed all of his books that I’ve read. And I think this opening paragraph is so good at describing such extreme cold – the short sentences showing how hard it is to breathe – and at the same time without saying so lets you know this scene is by the sea. I hardly even noticed it’s written in the present tense!

This paragraph entices me to read this book – I want to know more. Why is this person in this situation?

The blurb tells you more:

A man stands bewildered on a deserted beach on the Hebridean Isle of Harris. He cannot remember who he is. The only clue to his identity is a folded map of a path named the Coffin Road. He does not know where this search will take him.

A detective from Lewis sits aboard a boat, filled with doubt. DS George Gunn knows that a bludgeoned corpse has been discovered on a remote rock twenty miles offshore. He does not know if he has what it takes to uncover how and why.

A teenage girl lies in her Edinburgh bedroom, desperate to discover the truth about her scientist father’s suicide. Two years on, Karen Fleming still cannot accept that he would wilfully abandon her. She does not yet know his secret.

Coffin Road follows three perilous journeys towards one shocking truth – and the realisation that ignorance can kill us.