Another round of ABC Wednesday began today. Amazingly it’s been going for around 5 years and this is Round 11.

A is for The Artist’s House at Argenteuil by Claude Monet, one of my favourite Impressionist paintings. It’s oil on canvas painted in 1873, now held in the Art Institute of Chicago.

Monet moved to Argenteuil in 1871 and lived there until 1877. This was a prolific period for him – he was happy and well-off during that time. It was whilst he was living there that he developed a passion for gardening, influenced by fellow artist Gustave Caillebotte. This painting shows the first house he lived in at Argenteuil, with beds of red, white and blue flowers in front of the house, a creeper covering much of the wall and potted plants in large blue and white tubs on the gravel drive.

I especially like this painting because of the colours and also the figures adding personality – the little child with a hoop is Monet’s five-year old son, Jean, whilst his wife, Camille is seen in the doorway.

I love this bright, colourful painting by Monet of the terrace of his aunt’s house, near Le Havre. Monet painted it in 1867 whilst he spent the summer there. The high horizon with its line of boats and distinct bands of colour shows the influence of Japanese art. The painting almost has a 3-D effect, but most of all I love the contrast of colours and the delicate portrayal of the flowers and figures.

It was not such a happy time for Monet as his father, shown seated in the painting, was about to cut off his allowance because of his affair with Camille Doncieux, who had just given birth to Monet’s son.

The painting, oil on canvas, is now held at the New York Metropolitan Museum of Art. I wish I could see the original!

This post is a contribution to ABC Wednesday for the letter T.

Camille Pissarro (1830 – 1903) was one of the French Impressionist painters. In 1866 he moved to Pontoise on the banks of the River Oise, on the outskirts of Paris and lived there until 1884. He loved the area and painted 300 or so paintings in that period. L’Hermitage Ã  Pontoise, the painting above, is one of my favourites of his, painted in a realistic rather than an impressionist style, showing an idyllic village scene and the hills behind. I like all the detail and his use of light and shade drawing attention to the figures on the road and highlighting the houses.

Ten years later he painted Red Roofs showing a corner of the village in winter with the traditional 18th century houses viewed through the trees. I like the blend of colours with the differing tones of the red of the roofs, fields and earth in the foreground, contrasting with the green of the grass and the blue of the sky. The twisting forms of the trees with their vertical trunks contrast sharply with the geometric shapes of the houses. 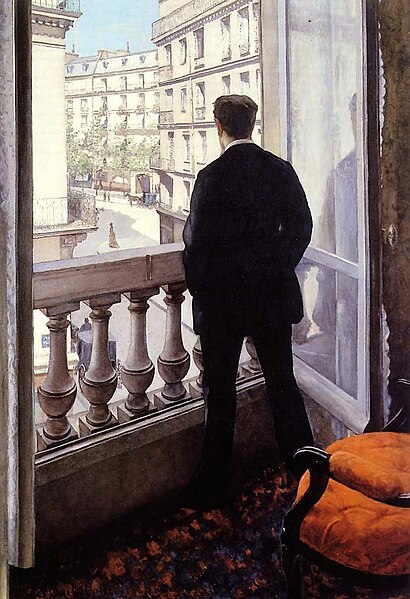 I’m quite surprised that Gustave Caillebotte (1848 – 1894) was a member of the French Impressionists as his paintings are much more realistic than the others’ paintings. He painted more modern subjects and his paintings are almost photographic in style.

His painting of a Young Man at Window shows Caillebotte’s brother standing at the window of a new apartment looking out on the scene below. I love the clarity and crispness of this painting, the detail of the stone balustrade, the back view of the young man – a ‘flaneur’ or man about town – and the contrast between the dark interior and bright view outside the window. In the 1870s Paris was being transformed into a modern metropolis under Napoleon III, with Baron Haussmann’s new boulevards and apartements and the rise of the bourgeoisie. The urban setting of this painting shows the tree-lined boulevard and horse drawn carriages.

Is the young man looking at the woman outside? Does he know her? What is the story behind the painting?

Sisley was an English Impressionist landscape artist, born in France where he lived for most of his life.

This is one of his paintings that particularly appeals to me – Small Meadows in Spring (c.1881)

This shows ‘le Chemin des Petits PrÃ©s‘, an oil painting of a riverside path which ran along the left bank of the Seine, connecting the villages of Veneux and By. The path has now been replaced by a paved walkway. The village visible on the opposite bank is Champagne.

I’m spoilt for choice, but on reflection I think La Loge (1874) is my favourite painting by Renoir.

The ‘loge’ is a box at the theatre nearest the stage. This painting is my favourite Renoir because of its fine detail within an Impressionist painting. I love the precise depiction of the lady’s face and jewellery, the soft fabric of her dress, its flimsy lace bodice and cuffs and the splashes of red against the black and white. She is the focus of the painting with the gentleman behind her in the background, but my eyes are also drawn to him with the light glinting on his opera glasses.

This is a painting that draws our attention to where the people are looking – the gentleman is looking up at other people and the lady has put down her opera glasses and is maybe showing  herself to the audience. There is an ambiguity about this painting, which always has me wondering just what is going on.

There is a detailed description of this painting on The Courtauld Gallery’s website, where the painting is held. I was disappointed it wasn’t on display when I visited a couple of years ago.

I only ‘discovered’ Berthe Morisot a couple of years ago, but I really like her paintings, especially this one,  On the Balcony, which is of her sister and niece on a balcony in the Passy suburb of Paris, looking out at the city – shown in the distance. It’s a small painting in oil, 1871 – 1872, now held in the Ittleson Collection in New York.

She was one of the French Impressionists and was married to Edouard Manet’s brother, Eugene. Her paintings are often studies of women, either out of doors, as in this one, or in a domestic setting.

I love the paintings of Edouard Manet, one of the French Impressionists. It is so hard to pick just one painting to show his work, but I’ve chosen A Bar at the Folies BergÃ¨re, which to my mind is just marvellous.

I’ve seen this in the flesh, as it were, at the Courtauld Institute at Somerset House on The Strand in London. It’s a lot smaller than I imagined it would be. It’s an ambiguous painting as some see the barmaid as not just selling her wares but as a prostitute and the man reflected in the mirror as a potential client. It’s also intriguing because it’s difficult to tell if the scene in the background is a mirror reflecting what is in front of the barmaid, but then her reflection is not in the right place, nor are the bottles matched up.

I love all the details and colours of this painting as well as the overall effect. I love the atmosphere it creates , with the barmaid isolated, lost in her own thoughts in a crowded room. She is the still point in a busy, noisy place.

Non-fiction books often take me a while to read and Sue Roe’s The Private Lives of the Impressionists is no exception; not however, because it’s difficult to read or boring, but simply because I decided to read it slowly. The Impressionists were a mixed bunch, including Manet, Monet, Pissarro, Cezanne, Renoir, Degas, Sisley, Berthe Morisot, Mary Cassatt, and Caillebotte. I feel I got to know some of them more than others and have only just skimmed the surface of their lives, which is understandable in a book covering so many people.

The Private Lives of the Impressionists tells how the early leaders of the group met when students in the studios of Paris. There was Monet, from an affluent family background originally from Normandy, Pissarro a Portuguese Jew from a very different background, born in the Dutch West Indies, Cezanne, a strange and intense student from Aix-en-Provence. The group widened with the addition of Renoir, from a working family (his father was a tailor from Limoges), Sisley the son of an English merchant and a Frenchwoman, and Bazille the son of a wealthy Montpellier wine-grower. They rebelled against the Salon and were pilloried and criticised for their work. They struggled to make a living, although now their paintings sell for millions.

Manet, whose father was a judge and mother the god-daughter of  the King of Sweden, was not really a part of their group , although over the years he supported them but never exhibited at the Impressionists exhibitions. To say that Manet was a complex character is an understatement and I’m going to read a biography devoted to him alone at some point. I’d also like to know more about Pissarro, Berthe Morisot and Renoir in particular.

This book follows their lives and loves and how their art developed over 26 years between 1860 when they first met and the introduction of their work to America in 1886. The Epilogue summarised what happened to each artist as the end of the century approached and the Paris art scene changed completely.

I now feel rather sad to have come to the end but there is a bibliography, essential for non-fiction books in my view, listing other books on the artists. If I’m being picky I’d criticise the bibliography because it’s arranged a-z by author – I’d prefer it to be arranged the individual artists. I’d also have liked more illustrations, but there are plenty of books on Impressionism.  I’d also love to travel the world to see their paintings – in London, Paris, and the US – well maybe I’ll manage the London galleries.

These are some of my favourite paintings, some of which are in this book.

This is the  eleventh library book I’ve read this year – still on target to complete the Support Your Local Library Challenge.

I don’t need to borrow any more books, but I had to go to the library to return The Gargoyle (see here) and of course then I couldn’t leave without at least looking at the books. This  week I concentrated on non-fiction as I already have a few novels on the go. I  read non-fiction much more slowly than fiction, so I don’t read many.

The photo below shows part of my local library’s non-fiction section. It’s not large but it has a good selection of books and I always find something of interest there.

I came home with three books (I was very restrained remembering all my unread books):