I’m reading The John Lennon Letters edited and with an Introduction by Hunter Davies. 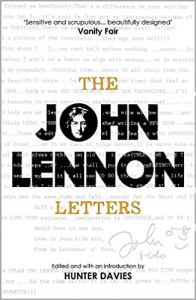 The reaction of John Lennon to most things, whether joy or anger, fear or loathing, fun or fury, was to write it down. He responded with words, not just music.

An organized Beatles’ fan club existed long before they had received any national attention or had even produced a record, which is surprising, but shows the extent of their success and popularity when on paper they had achieved so little. From 1962, they were writing lots of letters on fan club notepaper.

A lifetime of letters, collected for the first time, from the legendary The Beatles musician and songwriter John Lennon

John Lennon is one of the world’s greatest-ever song writers, creator of ‘Help!’, ‘Lucy in the Sky with Diamonds’, ‘Imagine’ and dozens more. Now, his letters have been collected and published, illuminating as never before the intimate side of a private genius.

Hunter Davies, author of the only authorised biography of The Beatles, has tracked down almost three hundred of Lennon’s letters and postcards – to relations, friends, fans, strangers, lovers and even to the laundry. Some of the letters are tender, informative, funny, angry and abusive, and some are simply heart-breaking – from his earliest surviving thank-you note, written when he was ten, to his last scribbled autograph given on 8 December 1980, the day he was shot, aged forty.

A trip down memory lane!

16 thoughts on “My Friday Post: The John Lennon Letters edited and with an Introduction by Hunter Davies”