This month the chain begins with Daisy Jones and The Six by Taylor Jenkins Reid,  a novel about the rise and fall of a fictional 70s rock band inspired by Fleetwood Mac. 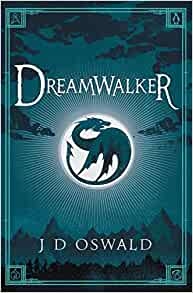 There are always several ways to go when compiling these Six Degree chains and at first my mind went blank  but looking at the books we got for Christmas I decided that Face It: a Memoir by Debbie Harry was just the right book for my first link, a book about a real rock band. Debbie Harry is the best known face of Blondie; she and the band forged a new sound that brought together the worlds of rock, punk, disco, reggae and hip-hop to create some of the most beloved pop songs of all time.

The Ballad of Jethro Tull: The official illustrated oral history is another book we got for Christmas. It’s Jethro Tull’s story told by Ian Anderson, band members past and present and the people who helped Tull become one of the most successful bands in rock history.

And then I thought my chain needed a change of genre, but sticking with the word ‘ballad’ I thought of Dreamwalker: The Ballad of Sir Benfro: Book 1 by James Oswald, a magical tale of the young dragon, Benfro, inspired by the language and folklore of Wales. It follows the adventures of a young dragon, Sir Benfro, in a land where his kind have been hunted near to extinction by men.

For the next link I turned to crime fiction and to one of James Oswald’s Inspector McLean novels, set in Edinburgh – The Hangman’s Song. It’s a dark, tense novel with elements of the supernatural  and parapsychology thrown in. It’s not a book for the faint-hearted or the squeamish as there are details of some gruesome deaths, murders and beatings that the characters go through.

James Oswald is a Scottish author and so my last link is to another Scottish author – Chris Brookmyre, who has written The Way of all Flesh, under the pseudonym of Ambrose Parry with his wife, Dr Marisa Haetzman a consultant anaesthetist. It is set in Edinburgh in 1847 as Dr James Young Simpson, a professor of midwifery, discovered the anaesthetic properties of chloroform. It combines fact and fiction most successfully, the social scene, historical and medical facts slotting perfectly into the plot. It was on the Longlist for the 2019 Theakston Old Peculier Crime Novel of the Year.

But the winner was Thirteen by Steve Cavannagh, an Irish author. It’s the fifth book in the Eddie Flynn series of crime thrillers, ‘serving up a delicious twist to the traditional courtroom thriller, where in this instance the real killer is not the one on trial, but a member of the jury!’ I have a copy but haven’t read it yet. And quite by chance I see that it also links back to Daisy Jones and the Six as it has a number in the title.

From a fictional rock band to two real rock bands my chain also links up books of ballads and three crime fiction novels.

Next month (1 February 2020), we’ll begin with Fleishman is in Trouble by Taffy Brodesser-Akner.

18 thoughts on “Six Degrees of Separation: from Daisy Jones and The Six to Thirteen”