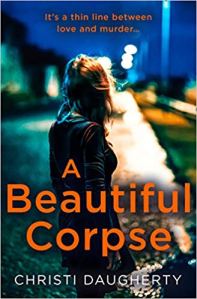 I saw A Beautiful Corpse by Christi Daugherty on NetGalley and thought I would like it from the description, but not expecting to enjoy it as much as I did. I didn’t realise that it’s the 2nd in the Harper McClain series but I think it works very well as a standalone.

I liked a lot about it – it is well written, has a fast-paced plot, but not at the expense of the characters, and it’s set in Savannah, with its historic buildings, parks and ancient oak trees covered in Spanish moss.

Harper McLain is a crime reporter with the Savannah Daily News. The book begins late one evening as she is playing pool in the Library Bar with her friend and bartender, Bonnie. The crime photographer rings her, telling her about a murder on downtown River Street, a narrow cobblestoned lane between the old wharves and warehouses and the Savannah River. And she is shocked to discover that the young woman sprawled on the uneven cobbles is Naomi, a law student, who had worked with Bonnie at the Library Bar. She had been shot dead.

There are three men who are all suspects, but her current boyfriend Wilson Shepherd is the prime suspect. The Library Bar owner, Fitz, is also a suspect especially as no one has seen him after the shooting. And then there is her ex-boyfriend Peyton Anderson, the powerful DA’s son. The police are convinced that Wilson is the killer, but after Harper talked to him, she just can’t believe that it was him. There were no witnesses to the shooting and when Harper talks to Jerrod, Naomi’s father, she realises that Peyton’s alibi may not be as solid as the police maintain it to be.

This a story of obsession and jealousy and the tension rises as the killer’s focus shifts on to Harper herself. She is a strong determined character, determined to find out the truth. But as well as the murder investigation Harper has her own personal problems to contend with. Her job as a reporter is under threat, someone is breaking into her apartment and her personal relationship with Detective Luke Walker seems about to be revived, but she is wary where it will end. On top of all that she is desperate to find out who had killed her mother twelve years earlier.

I loved it and it has made me eager to read the first book, The Echo Killing, to find out more about Harper and her background and also to read the next book in the series – Revolver Road due to be published in March next year – to find out what happens next.

2 thoughts on “A Beautiful Corpse by Christi Daugherty”