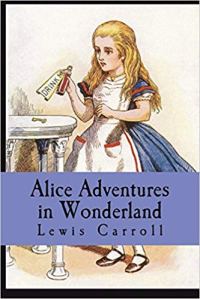 This month the chain begins with Alice’s Adventures in Wonderland by Lewis Carroll– a book I read as a child and loved.

I was tempted to make my first link to Through the Looking Glass, Carroll’s follow-up book, or another of the books I loved as a child, but instead I chose: 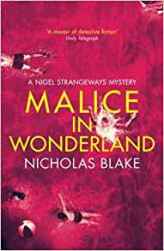 Malice in Wonderland by Nicholas Blake. In this Golden Age mystery Wonderland is a holiday camp, set on a cliff top overlooking the sea and there are several allusions to Lewis Carroll’s Alice’s Adventures in Wonderland. The train to Wonderland plunges into a tunnel, just as Alice falls down a rabbit hole and finds herself in Wonderland. And there is a prankster in the camp, the self-styled ‘Mad Hatter’, who is playing nasty and cruel practical jokes on the holiday makers. One of the visitors is Paul Perry, a young man who calls himself a scientist, who is there taking notes for the Mass Observation project.

Mass Observation is my second link.  In August 1939, with war approaching, the Organisation asked its panel to keep diaries to record their daily lives and selections from fifteen of these diaries are included in Our Longest Days: A People’s History of the Second World War edited by Sandra Koa Wing.

Diaries provide the next link – Testament of Youth by Vera Brittain is based on her diaries, telling of her life up to 1925, concentrating on the World War One years. Vera was a VAD (Voluntary Aid Detachment) during the war, nursing casualties both in Britain and France.

Agatha Christie was also a VAD member during World War One. In 1917 she worked in a hospital dispensary in Torquay and studied to take her Apothecaries Hall examination so she could dispense for a medical officer or a chemist. In her Autobiography she wrote that it was whilst she was working in the dispensary that she first thought of writing a detective story. Surrounded by poisons she decided it should be about a murder by poisoning.

So my fifth link is to the first detective story she wrote The Mysterious Affair at Styles. It is set during the First World War I at Styles Court, a country house in Essex, owned by the very wealthy Mrs Inglethorp, who dies from strychnine poisoning. Captain Hastings enlists the help of Poirot, who is living in the village of Styles St Mary with other Belgian refugees, to investigate the matter.

And my final link is Strong Poison by Dorothy L Sayers. Lord Peter Wimsey, the aristocratic amateur detective, and Harriet Vane, a crime fiction writer, first met in this murder mystery. Harriet is on trial for the murder of her former lover, Philip Boyes, who died from arsenic poisoning. Wimsey, attending the trial, is convinced she is innocent and sets out to prove it … and falls in love with her.

My chain is linked by books about Wonderland, the Mass Observation project, diaries VADs and poison. It passes from fantasy land through the World War One years, and back into the world of fiction. It includes crime fiction and non-fiction.

20 thoughts on “Six Degrees of Separation: from Alice’s Adventures in Wonderland to Strong Poison”